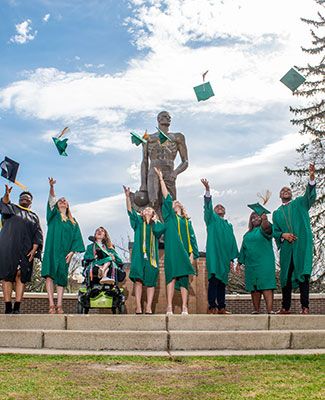 Potholes on the Playing Field

For so many students, coming to Michigan State is the first time they are thrown fully into an environment where not everybody looks like them, sounds like them, or comes from the same socioeconomic background or region of the world as them.

All of these students, from all of these backgrounds, are seated in the same classrooms, listening to the same lectures, receiving the same assignments in a setting where everybody has access to the same academic resources, the same library, and the same sources of enrichment, nourishment and entertainment.

On the surface, the playing field looks level. The university looks like the “great equalizer,” the place where every student has equal access to a bright future, upward social mobility, “the dream.”

But, there are potholes on the playing field.

While universities were designed to serve a lot of different purposes, they were not designed to serve the needs of all the students they admit. In fact, through intention or neglect, many of the students who meet a school’s admissions criteria fail to be adequately supported as they work their way toward graduation. For these students, college isn’t a level playing field. It’s full of potholes: structural inequalities embedded in the policies, procedures and norms of higher education.

What is the playing field, anyway?

Right now, MSU’s admissions standards are higher than ever, so let there be no question that every student admitted is well qualified and deserving. They most certainly are. But playing an active role in ensuring that all of them not only stay here, but succeed here, and go on to graduate, is a new look for Michigan State—and requires deep analysis on the university’s part of the pathways from matriculation to graduation.

[The student success agenda] has been a mindset change from the university as a sieve that is essentially involved in a weeding-out function for those who are not worthy to be here. That’s the old phrase about, ‘Look to your right, look to your left. Only one of you will be here.’ I think that has changed to the view that, if you got admitted, we have a responsibility to make it possible for you to succeed.

So if the university is the playing field, it is MSU’s responsibility to take a close look at it, find the inequities—potholes, if you will—and address them: fill the ones that need to be filled, help students find a route around them or, in some cases, build a new playing field entirely. MSU’s student success agenda raises the expectations of its students and better supports them as they tackle challenges.

And what are the potholes?

Some potholes are in the curriculum and are being addressed at an academic level. A common first-year mathematics course, for example, just underwent a massive reform to make it more productive, more equitable and less of a “weeding-out” experience for students while at the same time increasing the material students are expected to master.

But many of the potholes are—you guessed it—related to money.

On a structural level, the implementation of flat-rate tuition is making it easier and more cost-effective to take 15 credits per semester (though as few as 12 and as many as 18 per semester cost the same), so students will remain on the standard four-year, eight-semester timeline for graduation, which saves them the additional living expenses associated with having to take summer classes or tack an additional year or more onto their studies to complete their degree.

Still, in-state costs for an undergraduate degree are as high as $100,000, and out-of-state costs could be as much as $200,000, which is why it is more important than ever that these and other student success initiatives help to ensure that students are getting what they pay for.

It seems to be working. In fact, MSU’s increasingly good value is widely recognized. Money magazine ranks MSU 59th on its 2019 list of “Best Colleges for Your Money,” which lists quality of education, affordability and outcomes as its criteria.

Kiplinger’s 2019 edition of “Best College Values” has MSU ranked 53rd among public universities for in-state students (a ranking that has improved from 85th in 2007.) Kiplinger bases its rankings entirely on measurable criteria such as student-faculty ratio, admission rate, graduation rate, cost and financial aid.

So MSU is worth the money, but when the money isn’t there, scholarships can make the difference for many students.

Scholarships will fill the potholes

Sometimes, a financial issue is straightforward: a student doesn’t have enough money to pay their tuition.

But sometimes the issue is more nuanced than that. Maybe the student is dealing with or recently overcame a personal hardship. Maybe the student really needs their summer job to make ends meet but also really needs to take an internship in another city. Or maybe they can’t afford the expenses associated with an education abroad program that could open a lot of doors for them.

In some cases, a monetary reward can go a long way in recognizing a student for their outstanding achievements in the classroom or in the community and give them the inspirational boost they need to keep working toward their dream.

Bottomline, scholarship funds give Michigan State the flexibility to award more money to more students and change their lives for the better.