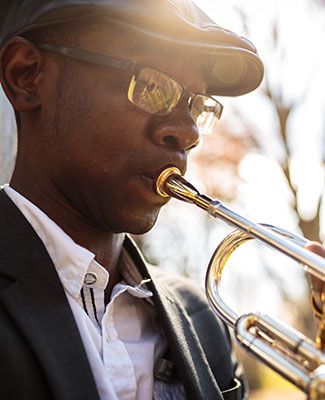 Carlot Dorvé’s journey to becoming an accomplished musician didn’t get off to the smoothest start.

He grew up in Haiti, lost his right arm to an infection at age 5, and when he started school, he was discouraged from trying the thing he wanted to learn the most: how to play a musical instrument. Teachers said, “You can’t play trumpet with one arm!” But Carlot picked up the trumpet anyway. He learned to hold it and press the keys with only his left hand, practicing twice as much as anyone he knew, and before long, he was the one teaching others how to play.

A chance meeting with an MSU alumnus led him to the College of Music at Michigan State, where he set out to pursue a bachelor’s degree in trumpet performance.

Thanks to scholarships, paying for college didn’t have to be yet another obstacle for Carlot, who had already overcome so many obstacles in his young life. In addition to a College of Music scholarship to cover the cost of his tuition, Carlot received a number of other scholarships throughout his undergraduate career, including the Marquis L. Otis Endowed Scholarship, the John Gulash Memorial Scholarship, and the Dorothy Carr Houvener Memorial Scholarship. Financial support allowed him to develop as a performer by taking classes that were challenging and fulfilling, without having to worry about how he would pay for them.

Support for his undergraduate education also put Carlot in a position to immediately enter graduate school and continue developing his craft.

In addition to being a tenacious student of trumpet performance—after MSU, he went on to earn a master’s degree in trumpet performance from Pennsylvania State University in 2018—Carlot also has a burgeoning performance career. He has played for Wynton Marsalis, and as a soloist with Holy Trinity Philharmonic Orchestra, and the Southern Symphony Orchestra, among others. In 2016, he was invited to Great Britain to be featured in the “Yes I Can!” commercial for the Paralympics. His musical gift has taken him all over the United States and Europe.

For a young man with enough talent to have made a career solely as an international performer, Carlot certainly hasn’t forgotten where he came from. On return trips to his native Haiti, he teaches at trumpet clinics and camps, and places special focus on helping children with disabilities—an experience that he’s carrying through into the next chapter of his life: earning a Ph.D. in music education at the University of Missouri.

The switch from “performer” to “educator” was a change in focus for Carlot: from “focus on self” to “focus on others.” And it feels like exactly the right way for him to pay forward the great experience he had at Michigan State, and offer other young people the same kind of mentorship, opportunities and empowerment he received on the path to pursuing his own dream.