Your Scholarships, Their Future: The People who Fill the Potholes

In their words: Ann and Jeff Feld 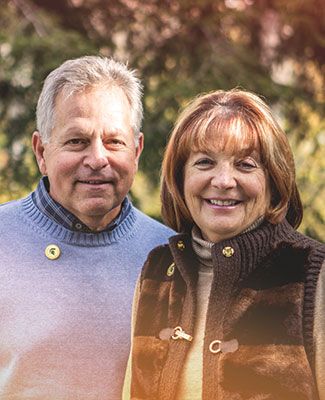 Your Scholarships, Their Future: The People who Fill the Potholes

In their words: Ann and Jeff Feld

The Felds “are” because of MSU.

They met here. They earned degrees here. They laid foundations for successful careers here. And, now retired and living in Las Vegas, both Ann and Jeff have found a deep sense of purpose and belonging as active members of the Spartan community and the community of MSU’s most loyal and committed donors.

But for Jeff, especially, it’s easy to imagine a scenario where none of that would’ve been possible.

If not for Michigan State’s effort to cobble together scholarships, grants and a work study to help him pay for his degree, Jeff wouldn’t have been able to go to college—any college—at all.

I knew I wanted to go to college, but the fields weren’t level. Essentially, what it boiled down to is, because of financial aid, MSU gave me a shot. With financial aid, I was on the same footing with everybody else.

Ann’s parents were able to help her, financially, in her pursuit of a college degree—but they had to carefully save every penny they possibly could in order to do it. Their determination that Ann become the first in their family to graduate college is something that still brings sentimental tears to her eyes.

Though Ann’s own success in life is the embodiment of her parents’ legacy, she was so worried that their names would be forgotten.

So Jeff devised a plan. As a surprise for Ann, he worked with development staff in the College of Education to create a scholarship in her parents’ names that would provide financial support to students who aspired to be teachers.

Following the journeys of the students who receive the Harry and Bertha Konopko Endowed Scholarship each year, along with the recipients of the two scholarships the Felds have created to support student athletes, has brought Jeff and Ann immense joy.

“You get all kinds of thank-you gifts when you create a scholarship, but the letters—the thank-you letters from the students—are the gifts that mean the most,” Jeff says.

“And it’s so nice when we get to meet them in person,” Ann adds. “The Konopko Scholarship recipients right now are two wonderful young women, and it was so nice to meet them last fall, have dinner with them and talk with them. We find out about their backgrounds; they learn about us. It’s something Jeff never got to do as a scholarship recipient. He never knew who to thank.”

Being a donor, and paying it forward to the next generation, is his thank-you for the chance Michigan State took on him all those years ago.

“For us, it was really important to give a student a chance. And hopefully they’ll always remember that, and take full advantage of it, and then, someday, when they’re very successful, they’ll follow the lead and pay it forward, too.”