WKAR Public Media: Thanks to 100 Years of Support

WKAR, one of the nation’s leading public media services, turns 100 next year—thanks in part to a steady stream of community support through annual giving. 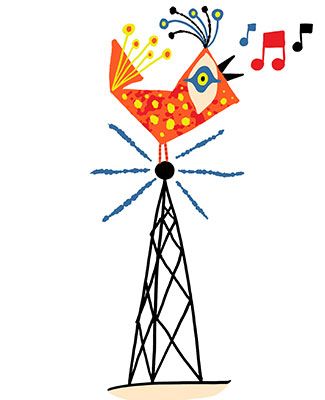 WKAR Public Media: Thanks to 100 Years of Support

WKAR, one of the nation’s leading public media services, turns 100 next year—thanks in part to a steady stream of community support through annual giving.

While large gifts have undeniable impact, the steady stream of community support through annual giving also has added mightily to MSU’s status as a powerhouse educational institution. The university’s broadcasting services division—the public media station WKAR—turns 100 next year and serves as a particularly poignant example of how that works.

WKAR radio unofficially began in 1917, when a student communicated with the East Coast. Another student and an electrical engineering professor expanded on the concept, eventually setting up shop in Olds Hall. The first official program? An hour-long, student-produced opera titled “Campus Nights” in 1922.

The first decade included football games and bedtime stories for children. In the 1930s and ’40s, with the strong support of MSU Presidents Shaw and Hannah, the station expanded to crop reports, weather forecasts, classical music, political speeches, lectures and more athletic events. Harkening to its ongoing role as a trusted source for information, WKAR became a hub for World War II coverage and analysis, broadcasting speeches by President Franklin Roosevelt aside faculty offering the perspective of their various disciplines.

The success of the radio effort positioned WKAR perfectly for the television age, when the station offered one of the first educational television programs east

of the Mississippi River in 1954. And the success of its television efforts led to being a forerunner in the digital age as well. WKAR recently marshaled that strength to adjust priorities and shift resources nearly overnight, becoming an educational guardian angel for hundreds of thousands of children and their parents as Michigan schools were abruptly forced to wrestle with remote learning due to the COVID-19 pandemic.

In fact, WKAR stands today as one of the leading public media services in the nation. In the past year, the WKAR news team has been lauded for providing critical local and national news on the pandemic, racial justice protests, the 2020 elections and more. WKAR-TV was named 2020’s Michigan Public Television Station of the Year by the Michigan Association of Broadcasters, marking the ninth time in 10 years. Susi Elkins, WKAR general manager and director of broadcasting, was recently elected to the national boards of the Public Broadcasting Service and America’s Public Television Stations. These boards drive the national conversations on programming and policy for all member stations.

Philanthropic support has been key to every new initiative and every success of WKAR. Recent fundraising efforts reflect how the pandemic underscored the importance of WKAR in people's lives. In December, WKAR participated in Giving Tuesday, a national one-day movement meant to unofficially “open” the giving season. More than $55,000 in donations came in for WKAR, which had previously raised just over $8,000 on the day.  A recent gift of $5,000 arrived with a note: “I want people to know I wouldn’t have made it through quarantine without WKAR.”

“As I think about our 100th anniversary, I am humbled by the value our community continues to place on the work we do,” says Susi Elkins. “WKAR has been a trusted resource for almost a century, thanks to the philanthropic support we receive. We look forward to continuing this legacy, connecting people to powerful ideas that inspire personal growth and positive change.”

LEARN MORE about supporting WKAR by contacting Senior Director of Development Melanie McGuire at melanie@wkar.org or by calling (517) 884-4730.

Judy and Jim DeLapa’s scholarship has made an incalculable difference for students who utilize the critical services of the Resource Center for Persons with Disabilities during their time at MSU. This year, the fund provided its 100th scholarship.