The late Eli Broad, his wife Edythe, and their foundation have given nearly $100 million to MSU, changing the physical and academic landscape of campus for the better—forever. 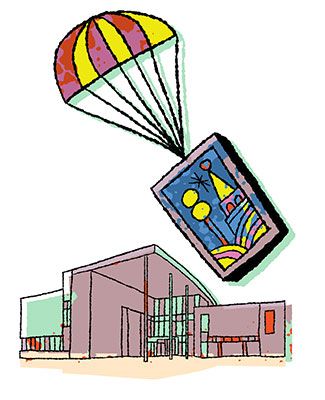 The late Eli Broad, his wife Edythe, and their foundation have given nearly $100 million to MSU, changing the physical and academic landscape of campus for the better—forever.

No discussion of the long-term impact of philanthropy at Michigan State would be complete without Eli Broad. With his wife, Edythe Broad, MSU’s most generous alumnus built an enduring, incomparable legacy at his alma mater that has helped to create a better society and will benefit Spartans for generations. Eli passed away in April at the age of 87.

Collectively, the Broads and their related foundation have given nearly $100 million to Michigan State, making them the largest donors in MSU’s history. A business college and an art museum are thriving on MSU’s campus thanks to their vision, alongside many other programs and initiatives.

The couple’s giving to MSU is abundantly evident in the Broad College of Business. Their $20 million gift in 1991 to the Eli Broad College of Business and the Eli Broad Graduate School of Management—both renamed in his honor—was the largest gift ever received by a public business school at that time and was designed to help the new full-time MBA program emerge as one of the nation’s top graduate management programs. Today, that program is a top 25 U.S. public program that has launched the careers of countless Spartans.

In 2014, Eli and Edythe ignited the university’s Empower Extraordinary campaign with a $25 million challenge grant to the Broad College, with $10 million designated for what became the Edward J. Minskoff Pavilion, which opened in 2019.

Sanjay Gupta, the Eli and Edythe L. Broad Dean of the college, in a recent tribute to Eli, wrote: “We are deeply committed to embodying his values in our curriculum and scholarship. We are greatly privileged and immensely proud to have Mr. Broad’s name as our calling card for every Spartan business graduate. And I am honored and humbled to have the opportunity to lead the college that bears his name as we carry out his incredible legacy.”

The Broads also sought to bring their passion for the arts to MSU. Their commitment led to a world-class art museum that transformed arts access in the state of Michigan when it opened in 2012. Almost 10 years later, the Eli and Edythe Broad Art Museum at MSU continues to garner attention internationally for the architectural marvel of its Zaha Hadid design as well as its exhibitions.

The couple invested more than $33 million in the museum, in addition to donating significant gifts of art. The result embodies Eli’s drive to always think outside of the box and remain uncompromising in his pursuit of excellence in both business and philanthropy. Situated on Grand River Avenue with two entrances—one facing MSU and the other the City of East Lansing—the building also reified Eli’s vision for the museum as a place of connection between art, campus and community.

“In keeping with Eli’s commitment to ensuring that art is accessible to the widest possible audience, the MSU Broad Art Museum is—and always will be—free and open to the public,” says Director Mónica Ramírez-Montagut. “It invites both scholars and members of the community to immerse themselves in work by local, national and international artists, as well as a permanent collection of over 10,000 works.”

Eli and Edythe often proudly pointed to their Detroit Public Schools (DPS) educational roots. In 2003, they saw how a connection between MSU and DPS could expand the missions of both their alma maters. They helped develop a new generation of urban teachers, this time with a multimillion-dollar gift to the College of Education, which established the Broad Partnership between MSU and Detroit Public Schools and launched a series of programs that continue today.

While taping his 2014 Spartan Saga, Eli had this to say:

“When I leave this earth, I’d like to leave something behind that people will benefit from and remember that I had something to do with that. I have a need to work on things, to make things better, to give back. I’ve had all these opportunities—a great education at Michigan State, lots of opportunities. And, I think I have a debt to take care of, and that’s giving back and making things better.”

Judy and Jim DeLapa’s scholarship has made an incalculable difference for students who utilize the critical services of the Resource Center for Persons with Disabilities during their time at MSU. This year, the fund provided its 100th scholarship.