Endowed positions that are part of the family 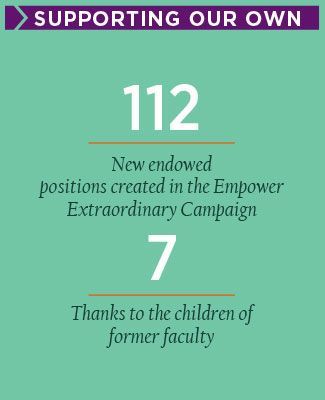 Endowed positions that are part of the family

As employees of Michigan State University, we know our work is part of something bigger that has a positive and profound effect in the world at large. But sometimes the impact of our work hits a lot closer to home.

Many children, grandchildren and spouses of current and former faculty and staff look for ways to honor the contributions of MSU leaders who also happen to be members of their own families. In the Empower Extraordinary campaign, that led two families to create seven endowed faculty positions to carry on their families’ MSU legacy.

Tung, who died in 2009, considered MSU to be his spiritual and academic home. He is best known for creating the Coordinated Theoretical-Experimental Project on Quantum Chromodynamics, or CTEQ, which brought particle physicists from two camps—experimental and theoretical—together into one research program.

Lei Tung says the family had talked about creating the endowment even before his father retired in 2007. “He wanted it established at MSU, where he found such strong support for his principles and aspirations.”

Chien-Peng (C.P.) Yuan was named the inaugural Wu-Ki Tung Professor in 2017. Yuan is a prominent member of CTEQ and worked closely with Wu-Ki Tung for many years.

Tom Yunck, the founder, chairman and chief technical officer of GeoOptics Inc., says he grew up in the shadow of MSU’s campus.

“I didn’t so much have a hometown as a home campus. There were always Spartans around, like a permanent family,” Tom says.

Tom attended Princeton and Yale universities. He was a research manager for NASA before founding GeoOptics which developed technology to greatly reduce the cost of collecting data from satellites for use in weather predictions.

Yet his roots remained here at Michigan State, and he has a long history of giving back to the place that still feels like home.

He previously created a faculty chair and scholarship endowments in the Department of English named for his parents. In 2016, he made a $10.5 million charitable bequest to fund future faculty positions as well as postdoctoral research and support for Computational Mathematics, Science and Engineering. He was named MSU’s Philanthropist of the Year in 2017.

“I didn’t so much have a hometown as a home campus. There were always Spartans around, like a permanent family,” Tom says.

Sons of MSU Inspired Others

The Jerry Cowen Endowed Chair in Experimental Physics, created in 2001 by Randolph (Randy) Cowen (’74, Arts and Letters/Honors College), former CIO at Goldman Sachs, and his wife, Phyllis Green, in memory of his father’s life and physics career at MSU.

The Cowen chair has expanded to fund two positions currently held by Johannes Pollanen and Matthew Comstock, both assistant professors of physics and astronomy. The inaugural Koenig chair holder is Kalyanmoy Deb, a College of Engineering professor and BEACON Center for the Study of Evolution in Action research contributor.

Both Randy Cowen and Roger Koenig were active Empower Extraordinary volunteers, helping to inspire many of the donors who created endowments for the 112 new endowed faculty positions created in the campaign.