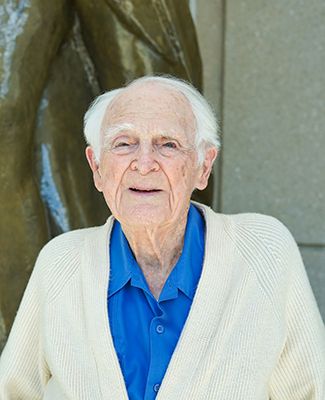 When a retired university executive and his spouse make a significant gift to create an endowment named the Neogen Land Grant Prize, you know there has to be a bit of a story.

It starts with a highly successful spin-off enterprise of MSU—food safety giant Neogen Corporation—but it is also about two stalwart believers in the value of MSU.

John Cantlon, the former vice president for Research and Graduate Studies, and his wife Irene made their gift much in the same way they’ve always supported MSU—not drawing attention to themselves but reflecting their strong belief in the importance of scientific discovery, the world-changing mission of land-grant universities and the meaningful contributions of graduate students. In short, they sought to highlight Neogen’s and MSU’s mutual goals of scientific research excellence.

The prize the Cantlons created provides $30,000 in annual support for MSU graduate students whose work has the potential to advance scientific understanding in ways that will also contribute to economic improvements in Michigan and beyond. It’s a legacy that fits well with John’s long career as an MSU leader.

“John Cantlon is a visionary leader who during his tenure at MSU played an instrumental role in expanding research in Environmental Toxicology, Material Science, Biotechnology and Nuclear Physics, as well as creating our osteopathic medical school (now college),” says Doug Gage, vice president for Research and Innovation. “Farsighted innovators and philanthropists like John are an example for all Spartans. We sincerely appreciate his gift and support of the next generation of innovators.”

John first joined the MSU faculty in 1954, becoming an associate professor in Botany and Plant Pathology. “I was a happy professor, with federal grant funding and four excellent graduate assistants,” he says, until President Walter Adams convinced him to take on being provost in 1969.

Six years and a presidential transition later, John took advantage of an opportunity to instead serve as the vice president for Research and Graduate Studies, a post he felt was more compatible with his passion for graduate students and the creative, can-do spirit they and their mentors bring to research projects. He held the position until his retirement in 1990.

During his tenure, Neogen was formed by MSU professors with an investment of just $50,000 from the university. As John recalls, it was seen as a way to help the State of Michigan diversify its economy, while at the same time helping MSU retain rising faculty stars, who could see the university was willing and able to create businesses based on their research.

Neogen has become an international food safety company with an enterprise value of more than $1.5 billion. Its Lansing-based Food Safety Division is a leader in the development and manufacturing of rapid test kits that detect dangerous substances in food products.

John served on the scientific advisory board for the company for ten years. He opted to take stock options rather than draw a salary. At the same time, Irene saw the promise of the company, and also invested in its stock early on. Their stock holdings formed the basis of making their gift for the endowment of nearly $700,000.

Recently, the former CEO of Neogen, Jim Herbert, made an additional $100,000 gift to the endowment.

“Neogen was a great idea,” says John. “Our hope is that this endowment will help retain some piece of its origin within MSU and, ultimately be a benefit to the communities MSU serves.”

In 2022, two College of Natural Science graduate students won the inaugural $30,000 Neogen Land Grant Prize awards in a competitive selection process administered by the Office of Research and Innovation.

Statistics Ph.D. student Sarah Manski’s project assesses the risk climate change may have on farmers in the United States. She is building a predictive model to quantify the risk value of soil health practices, such as conservation tillage, diverse crop rotations, and cover cropping, and the savings that would be accrued by adopting these regenerative practices.

“This grant will go a long way to expanding the impact of our project throughout the Midwest, especially to my home state of Michigan,” Manski says. “Our work has the potential to facilitate widespread adoption of regenerative agriculture and, in the spirit of land grant institutions like MSU and the Neogen Land Grant Prize, make American agriculture more sustainable, climate-resilient and climate-friendly.”

Vanecek also expressed her appreciation for the support: “This award will have a huge impact on my research and will provide the opportunity to explore many more possibilities to further investigate this new therapeutic strategy. Ultimately, my greatest hope is that it will also have an even larger impact on society, leading to the development of a new treatment to help those affected by ALS.”