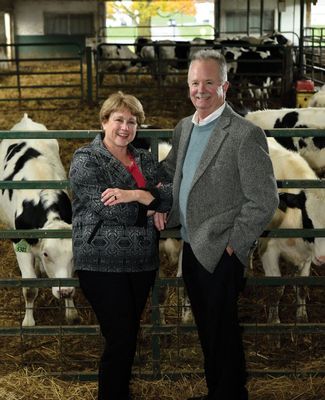 David Burns loved cows. As a young scientist and graduate student in reproductive biology, his love of cows led to exploring the use of ultrasound to monitor ovarian follicular growth and improve fertility in cattle.

His professor, Jim Ireland, wasn’t entirely sure how ultrasound on cows could develop into a thesis-worthy project. But Jim’s wife, Janet Ireland, an animal science research assistant, was encouraging.

They took a gamble. David learned that the number of ovarian follicles was remarkably variable among animals but highly repeatable within an individual. It turned out to be a novel finding leading to more than 20 scientific publications, four federal grants, and a potentially new method to genetically improve fertility in cattle, which also could lead to ways for reproductive success in women.

It’s one among many experiences that led Jim and Janet to make a $3 million future gift to support doctoral students. Their gift is through their retirement plans, which will distribute funds to MSU after both their lifetimes. These funds will be invested in an endowment which, over time, will grow and never be depleted as only a portion of earnings are spent each year.

“Stable support for graduate students is fundamental for the next generation of scientists,” says Jim. “Building a research team that includes exceptional students is critical. Our hope is to fund multiple fellowships, every four years, forever.”

Jim and Janet have made their careers on improving lives through research at MSU. They married in 1986 after meeting at an endocrinology conference. Jim already had been at MSU since 1977 and Janet joined him in 1988.

Sharing a passion for research from the beginning made each of them more appreciative of the long hours each dedicated to grant writing, publications, developing procedures, and analyzing results.

They love facing every day with a mystery to solve. That mystery might be how to make a tedious assessment process work for her, or writing a compelling paragraph in a research grant for him. There are rewarding moments when one of them says just the right thing to inspire confidence or a new idea in a colleague, student, or technician. And, chief among a long list of accomplishments is watching newcomers succeed.

They both believe MSU research will remain relevant and important.

“We deeply respect and are intellectually attracted to the many MSU scientists who dedicate themselves to  earning what makes life tick and using this information to resolve complex problems to improve animal and human health,” says Jim.

Janet adds: “We also strongly support undergraduate and graduate students who desperately want to train with these scientists to develop their own careers.”

The Irelands will direct ten percent of their gift to undergraduate support to fund summer internships in MSU’s Horticulture Gardens and a scholarship for Girl Scouts, both passions of Janet’s.

Learn more by contacting the Office of Gift Planning at (517) 884-1000 or giftplan@msu.edu to explore options as you are developing your estate plans and wish to remember MSU.