Continuing His Own Legacy

"At MSU, he found such strong support for his principles and aspirations. We are delighted to help extend that support to future generations of physicists and ensure continuity of his work." 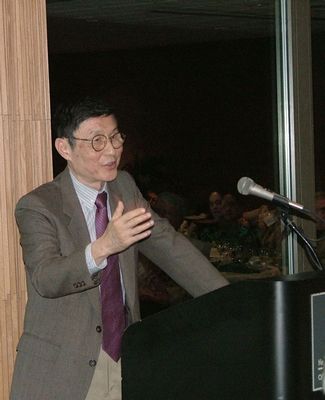 Continuing His Own Legacy

"At MSU, he found such strong support for his principles and aspirations. We are delighted to help extend that support to future generations of physicists and ensure continuity of his work."

Michigan State University has announced a $1 million gift to the Department of Physics and Astronomy in the College of Natural Science from the family of former MSU professor Wu-Ki Tung.

The gift will establish the Dr. Wu-Ki Tung Endowed Professorship in Particle Physics, to honor the memory of the internationally known particle physicist who taught and conducted research at MSU from 1992-2007. Tung passed away in 2009.

"Professor Wu-Ki Tung led the worldwide high energy physics community toward a rewarding tradition of direct theory-experiment collaboration,” said Phil Duxbury, professor and physics and astronomy department chair. “Our department is excited and honored to be able to continue this tradition in his name, through this endowed professorship created by his family."

Tung is best known for creating the Coordinated Theoretical-Experimental Project on Quantum Chromodynamics, or CTEQ, which brought particle physicists from two camps – experimental and theoretical – together into one research program. Based at MSU, CTEQ is one of only a handful of such groups, widely known and appreciated for changing the way in which measurements are made in the world of particle physics.

“This middle ground of active teamwork between theory and experiment was not as mainstream as working strictly in theory or strictly in experiment, but Wu-Ki saw that collaboration was needed and made it the centerpiece of the second half of his career,” said University Distinguished Professor Raymond “Chip” Brock, who was a close friend and colleague of Tung’s, and an original member of CTEQ. “This gift is exactly the right way to honor him. He would love that his legacy will inspire future faculty to the kind of science that he loved most: learning about nature collaboratively.”

Tung’s family members – wife Beatrice, sons Lei and Bruce, daughter-in-law Cecilia and grandchildren Allie and Max – hope the professorship will support future faculty members who share not only his passion for particle physics research, but also for scientific collaboration and collegiality.

“Collaboration between those steeped in the theoretical and the experimental, or even among entirely different disciplines, can result in exciting advances in knowledge,” MSU President Lou Anna K. Simon said.  “We are so thankful to Dr. Tung’s family for this gift that will allow his legacy to live on in a faculty member who shares his – and MSU’s – commitment to collaboration.”

Born in Yunan, China, Tung, who earned his doctorate at Yale, held research appointments at SUNY Stonybrook and the Institute for Advanced Study in Princeton, and served on the faculties of the University of Chicago, the Illinois Institute of Technology and the University of Washington (as an affiliated professor of physics) in addition to MSU; but he always considered MSU to be his spiritual and academic home.

“We had talked about this endowment even before he retired in 2007,” said Lei Tung, Wu-Ki’s son. “He wanted it established at MSU, where he found such strong support for his principles and aspirations. We are delighted to help extend that support to future generations of physicists and ensure continuity of his work.”

MSU is among the top 50 universities in the world in the field of physics and is home to the National Superconducting Cyclotron Laboratory and Facility for Rare Isotope Beams. The physics and astronomy department is regarded as one of the best in the country, with its nuclear physics graduate program ranked No.1 in the nation by U.S. News & World Report, a spot it has maintained since 2010.

For more information about making a gift to the College of Natural Science, contact Senior Director of Development Corey Longley Palmer at longleyc@msu.edu or call (517) 353-1637.