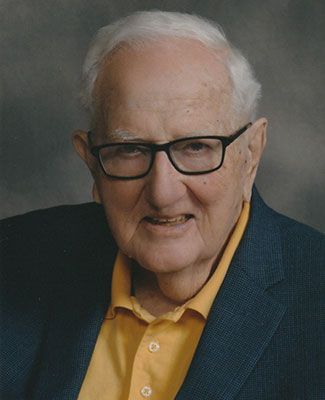 A $2 million cash gift from a 1946 alumnus has established the Martin C. Hawley Endowed Chair in Chemical Engineering at Michigan State University.

Retired Dow Corning Corp. executive William “Bill” J. Hargreaves of Midland, Michigan, said he is pleased to make a gift honoring Hawley, whom he called “the chemical engineer that people always point to at MSU.”

“Marty is big on the national scene and always makes Michigan State look good,” Hargreaves said. “This endowed chair is the appropriate place for my support. I hope it gives the College of Engineering the ability to hire outstanding faculty members now and as the years go by,” he added.

Hawley has been a student, teacher, administrator and leader at MSU for almost 65 years. He is a professor of chemical engineering and materials science, and the director of the MSU Composite Vehicle Research Center. He served as chairperson of the MSU Department of Chemical Engineering and Materials Science for more than 15 years.

“This is an amazing act of generosity on Bill’s part,” Hawley said. “Bill turned 100 earlier this year, which is amazing in itself. I’ve known him since he was an executive at Dow Corning. He has always been very supportive of me and our department. He has also supported an endowment for graduate student research in polymers and composites through the years.”

“This gives us a chance to constantly ask ourselves what are the chemical engineering needs of the day in education and industry. Who knows what the future will hold, so the beauty of an endowed chair will be the ability to update this position without constraints,” Hawley added.

“We are tremendously grateful to Bill Hargreaves for his vision and investment in MSU and the College of Engineering,” he said. “His gift ensures the university will be able to attract an academic leader in chemical engineering who will contribute to discovery and learning in a critical area.”

“This benevolent endowment will provide a dependable, perpetual source of funding to support creative scholarship and new academic opportunities,” Kempel said. “We are very grateful to Bill Hargreaves for this lasting and generous gift. Personally, this gift in honor of Martin Hawley means a lot to me since Martin has been a mentor and collaborator of mine since early in my tenure at MSU.”

Hargreaves was born in Bay City, Michigan. After service in the U.S. Navy during World War II, he graduated with a bachelor’s degree in chemical engineering from MSU in 1946 and began a career with Dow Corning in Midland, Michigan. He did post graduate work at Case Western Reserve University in Ohio, graduating in 1959, and is also a 1966 graduate of the Advanced Management Program at Harvard University.

He was elected to the Dow Corning board of directors in 1976 and served in that capacity until his retirement in 1986. He was named an executive vice president of Dow Corning in 1977. He has been an active volunteer in Midland for decades, including president of the Red Cross Chapter; an Elder of the Memorial Presbyterian Church; a trustee of Delta College; a trustee of the Midland Hospital Board; and a member of the Chamber of Commerce Board.

Hargreaves has supported the college and the university for decades, with his first recorded gift in 1956.

Hawley, of East Lansing, is a well-established industry and government consultant in the areas of computer simulation, chemical reactor design, process design and materials processing. His teaching career is highlighted by the perennial success of MSU students in the annual AIChE national design competition. Dozens of MSU students have received national awards and recognitions during the past 30 years.

Additionally, he has developed text materials and taught courses to students in international education programs on project engineering and management. He holds six patents and has published over 200 articles and books. He has been honored by the Chemical Engineering Professional Society as “Chemical Engineer of the Year” for his overall contributions to the profession. He has been honored by MSU with a Distinguished Faculty Award for excellence in teaching and research and received the Claud R. Erickson Distinguished Alumni Award, the highest honor presented to a graduate by the MSU College of Engineering.

A two-time MSU graduate, Hawley received a bachelor’s degree in 1961 and a Ph.D. in 1964 from MSU, both in chemical engineering.

Hawley noted that while the endowed chair is named for him, he will not be serving in the newly created faculty position. He said the department will conduct a national search and will name its first chair sometime in the next year or so.

LEARN MORE about support for the College of Engineering by contacting Senior Director of Development Stephen Bates at batesst@msu.edu or by calling (517) 355-8339.