A Beacon to the Value of Research

Lab technician Loretta Van Camp and Professor Barnett Rosenberg in the 1970s laboratory that would change the face of research at MSU. 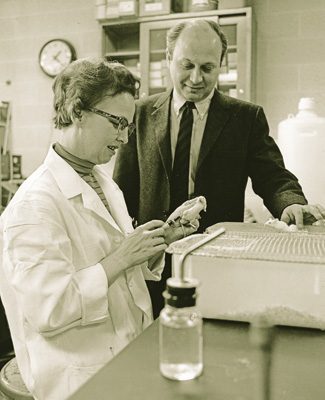 A Beacon to the Value of Research

Lab technician Loretta Van Camp and Professor Barnett Rosenberg in the 1970s laboratory that would change the face of research at MSU.

Back in the 1970s, a serendipitous observation in an MSU lab led to the use of the world’s most widely employed and effective anti-cancer drugs. To this day, the drugs, cisplatin (Platinol) and carboplatin (Paraplatin), are key ingredients in many of the treatment protocols that make cancer survivable for millions of patients.

The story behind the advance, by the late biophysicist Barnett Rosenberg and his team, underscores the lasting impact of basic research.

Drawn to MSU by then President John Hannah’s promise of freedom to conduct research in a frontier field—biophysics—Rosenberg became intrigued with the similarity in patterns between magnetic dipole fields and cell division. His experienced biological laboratory technician, Loretta Van Camp, set up an apparatus using platinum poles to create an electric field in a culture containing bacterial cells. They noticed a surprising result: the bacteria grew to a hundred times their normal lengths but did not divide.

The team suspected the platinum, not the electric field, was the cause and set up the experiments needed to test their hypothesis. They learned that a chemical compound identified as cisplatin created the bizarre growth.

The team set up further experiments in laboratory animals, leading to human clinical trials. By 1978, cisplatin was in wide use to treat testicular and ovarian cancer. Carboplatin, also patented for cancer treatment by the team, would later join cisplatin in wide use with equal effectiveness.

In addition to the lives that are being saved, the impact of Rosenberg’s anti-cancer discoveries—because they happened at a research university—can be measured another way. More than $300 million in patent royalty income from the sales of cisplatin and carboplatin poured into the MSU Foundation, permitting a re-investment that is supporting MSU’s research enterprise in a big way.

Income from the foundation has funded endowed chair positions at MSU, including the Rosenberg Chair in Neuroscience, held by Mark Breedlove, and the Rosenberg Professorship in Plant Biology, held by Robert L. Last.

Moreover, the bulk of the foundation’s income, build up by decades of work by MSU faculty and other investment, provides grants to initiate and expand promising research projects across the university. And today, is creating Foundation Professorships for some of MSU’s top faculty.