“To see my alma mater taking the lead in the intellectual advancement of Jewish studies and connectivity with Israel has been very rewarding and it is a great joy to be able to support the bright future of this program.” 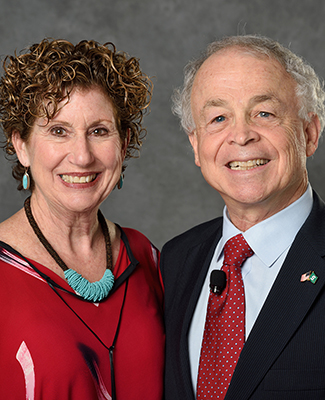 “To see my alma mater taking the lead in the intellectual advancement of Jewish studies and connectivity with Israel has been very rewarding and it is a great joy to be able to support the bright future of this program.”

Michigan State University has received a multi-million dollar gift from Alumnus Michael and Elaine Serling for the Jewish Studies Program.

This gift —a mix of cash and estate giving—will provide a new endowment in “Modern Israel” in Jewish Studies. It will serve as a catalyst, stimulating activities that join MSU faculty and Israeli colleagues in several fields, including the humanities, social sciences, business entrepreneurship, medical science and engineering, as they initiate new collaborative projects. It will also contribute to research, study abroad and internship opportunities in Israel for undergraduate and graduate students and provide support for visiting Israeli scholars. With this gift the Jewish Studies Program has changed its name to the Michael and Elaine Serling Institute for Jewish Studies and Modern Israel, in their honor.

“When I found out there was a Jewish Studies Program underway at MSU back in the ’90s, I was thrilled and wanted to help make it happen,” Michael Serling said. “To see my alma mater taking the lead in the intellectual advancement of Jewish studies and connectivity with Israel has been very rewarding and it is a great joy to be able to support the bright future of this program.”

The Institute is an interdisciplinary program that serves Jewish and non-Jewish students alike. It offers 25-30 courses a year, taken by approximately 650 students, the majority of whom are not Jewish. It also offers a minor, with 48 students of all backgrounds minoring last year. More than 200 MSU students have benefited from the institute’s faculty-led study abroad programs with generous institute scholarships covering program fees. The Institute also helps many of the 3,500 Jewish students at MSU develop critical knowledge and perspective on their Jewish heritage, including access to study abroad in Israel.

The Institute also works to build collaboration between MSU and Israeli colleagues in a variety of fields. With the Serling’s support, the Institute recently hosted “Israel at 70: Complexity, Challenge, and Creativity”, a two-day academic conference. Internationally-recognized speakers from across the globe, 40 in total, included entrepreneurs, scientists, authors, venture capitalists and members of non-governmental organizations such as the Brookings Institute and the Tel Aviv Institute for National Security Studies. Of the 40 speakers, 12 were from Israel.

“Teaching of and Scholarship on the history, culture, society and politics of Israel is flourishing at MSU, thanks to the leadership and support of Michael and Elaine Serling,” said Yael Aronoff, institute director and the Michael and Elaine Serling and Friends Chair in Israel Studies. “This naming gift creates a foundation of support that will enhance our understanding of Israeli society, and create more opportunities for MSU to work with our Israeli counterparts on cutting edge research, while ensuring that the historical breadth of understanding for Jewish experiences continues to grow and thrive at Michigan State. We are honored to have Michael and Elaine Serling’s names attached to our institute as they have been enthusiastic and dedicated supporters of Jewish Studies at MSU for more than two decades.”

Michael Serling has served as chairperson of the Jewish Studies advisory board and member of MSU Hillel Jewish Student Center’s advisory board.  An annual Serling Lecture on Modern Israel, now in its fourteenth iteration, is due to an endowed fund created by the Serlings for Israel-related programming. Also, the Serling Visiting Scholar Endowment in the Institute has helped bring, over the past six years, seven visiting Israeli scholars in four different colleges at MSU, who have offered a total of 27 courses. They have included anthropologists, architects, screenwriters, documentary film makers and directors, political scientists, environmentalists, and business entrepreneurs.

“We are grateful for Michael and Elaine Serling’s generosity and vision that has helped build an outstanding academic program,” said Provost June Youatt.  “We are strengthened in the study of Israel by an additional significant gift which ensures that an area of focus that is important to us today, will also be part of our future.”

Michael Serling obtained a B.A. in History along with teaching certification from MSU in 1966 and his J.D. in 1970 from the Detroit College of Law, now the MSU College of Law. In 2004, he received the MSU Distinguished Alumni Award, followed by the Philanthropist of the Year Award in 2010. His Birmingham legal practice specializes in environmental and product liability law with expertise in asbestos contamination disease that is sought after around the world. Elaine Serling is a registered nurse and graduate of Wayne State University’s Nursing College. She is an accomplished singer/songwriter and nurse.

The Serling’s collective philanthropy to MSU has been extensive and impactful.  In November, they will be honored at the 34th Holocaust Memorial Center Zekelman Family Campus Anniversary Dinner for their dedication and commitment to the center’s mission, and for their contributions to the growth of Jewish Studies at MSU, including their contribution of $500,000 to the William and Audrey Farber Family Chair in Holocaust Studies and European Jewish History.