$1.5 Million Gift Will Make MSU a Leader in Holocaust Studies 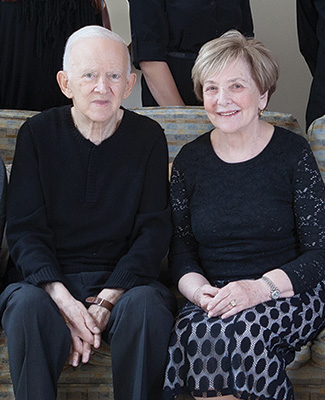 $1.5 Million Gift Will Make MSU a Leader in Holocaust Studies

Michigan State University’s newly created William and Audrey Farber Family Chair in Holocaust Studies and European Jewish History, funded by a $1.5 million private gift, will be one of just a handful of Holocaust studies chairs in the country, one of four in the Big Ten and the first and only in Michigan.

“The choice of a gift to MSU is based upon our recognition that MSU’s Jewish Studies Program has grown during the past years,” said Jeffrey Farber, son of donors William and Audrey Farber of West Bloomfield. “Now one of the most outstanding in the country, the addition of a professor in the area of Holocaust studies is critical.”

With the initial $2 million in place, the search for a teacher-scholar to fill the position will begin this fall, building upon the work of Ken Waltzer, former director of MSU’s Jewish Studies Program, who recently retired from MSU after 43 years of teaching and researching in the fields of Jewish history and the Holocaust.

“Holocaust education is very relevant, not just to the Jewish community, but also to the broader community in terms of promoting diversity and combatting racism and bigotry,” said Michael Serling, an MSU alumnus.

The Farbers and the Serlings agree education is the key to ensuring an event like the Holocaust never happens again.

“When we speak of ‘never again,’ we recognize the need for university students to confront this darkest period in the history of the Jewish people,” said William Farber.

The individual chosen as the first Farber Family Chair at MSU will have access to the University of Southern California’s Shoah Foundation Visual History Archive, an online portal that houses more than 52,000 video testimonies of survivors and witnesses of genocide — namely, the Holocaust.

Like the chair position, this subscription to the Shoah Foundation’s archive would not be possible without private support. MSU alumni Edward Brill and his sister Leslie Van Brandt made a recent $150,000 gift in memory of their brother Michael, who had a fondness for history and a fascination with World War II.

“This new position will be integral to our Jewish Studies Program, which serves on average 600 students in our classes and 35 Jewish studies minors,” said Yael Aronoff, the Michael and Elaine Serling and Friends Chair in Israel studies and director of Jewish studies.

Using the online archive will bring the teaching and research of Jewish studies into the realm of the digital humanities, an area in which the College of Arts and Letters is already excelling.

“These gifts are transformative,” said Christopher P. Long, dean of the College of Arts and Letters. “They will allow us to continue to attract the most engaged, talented and forward-thinking scholars in the country to the College of Arts and Letters at Michigan State, and enable us to take a leadership position with regard to digital humanities research and pedagogy.”

MSU is seeking an additional $1 million to support and strengthen the resources available for the Farber Family Chair and make it sustainable for years to come.

“MSU is fortunate to be the recipient of this gift from William and Audrey and their family, and those who they inspired to give subsequent gifts,” said MSU President Lou Anna K. Simon. “The William and Audrey Farber Family Chair in Holocaust Studies and European Jewish History pushes us one step closer to our ‘Empower Extraordinary’ campaign goal of 100 new endowed chair positions, and gives MSU the capacity to educate generations to come about this significant time in history.”

The Jewish Studies Program is an interdisciplinary program spanning six colleges and more than 10 departments across campus.

For more information on making a gift to the College of Arts and Letters, contact Director of Development Bridget Paff at paff@msu.edu or call (517) 353-4725.