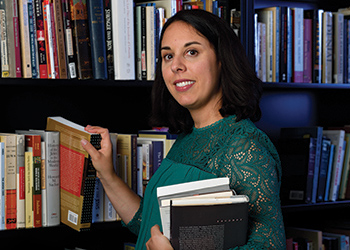 Professor Amy Simon, who officially begins her duties as the inaugural Farber Family Chair this August, is every bit the kind of dynamic scholar MSU would hope to attract with an endowed chair position. And the feeling is mutual. “It was as if someone at MSU knew who I was and wrote the job description just for me,” she says.

Simon has devoted her career to the study of first-person accounts of Holocaust victims, and the way those accounts—diaries, letters, memoirs and postwar testimonials—depict Holocaust perpetrators and the interactions between the two.

Most recently, she worked as a researcher at the United States Holocaust Memorial Museum (USHMM) in Washington, D.C., and she has taught in the history and Judaic studies departments at the University of Maryland, Baltimore County.

As the Farber Family Chair, she will have all of the resources she needs—including the ability to travel, attend conferences and hire a research assistant—to continue that research, but the part she is most excited about is that she will also have the opportunity to teach undergraduates.

“I’ve got some big shoes to fill,” she says, referring to those of Ken Waltzer, the well-known professor, Holocaust researcher, and director of the Jewish Studies Program, who retired in 2015. “I’d love to be that same kind of professor, whose class is one that students talk about—‘Have you taken Amy Simon’s Holocaust Studies class? You must.’”

Simon’s opportunities to impart knowledge won’t be limited to the classroom. Her new title—which makes her one of just a handful of Holocaust studies chairs in the country—already has given her a certain amount of increased visibility elsewhere in the academic community.

A former Leon Milman Fellow at USHMM and a former Kagan Claims Conference Fellow, Simon also has published articles on Holocaust literature and Holocaust perpetrators and regularly participates in international workshops and conferences through the USHMM, Yad Vashem, the Association for Jewish Studies and the Holocaust Educational Foundation.

Is there anything else MSU’s new Holocaust studies chair could possibly squeeze into her already-packed schedule? Of course. She’s been working on compiling her research into a book, and she hopes to publish soon.

To learn more about making a gift to the College of Arts and Letters, contact Senior Director of Development Bridget Paff at paff@msu.edu or call (517) 353-4725.