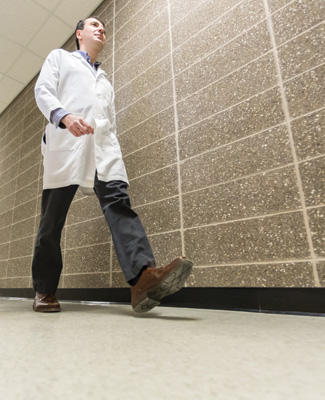 As you step into the laboratory of Robert Abramovitch, you sense that something extraordinary is taking place.

The microbiology and molecular genetics faculty member has assembled a burgeoning group of researchers. The team includes undergraduate students, graduate students, research associates, post docs and a lab manager. All are hard at work, addressing multiple experiments, gathering and analyzing reams of data. They are often in close collaboration with other researchers including those from MSU’s Colleges of Natural Science, Human Medicine and Veterinary Medicine.

They are motivated by one of the biggest health threats facing the world: tuberculosis (TB), which takes the lives of approximately 1.5 million people each year.

“One of the nice things about being at MSU,” says Abramovitch, “is that it’s a really positive, collaborative environment. People actively reach out to other researchers to launch projects and collaborations and solve problems.”

In the United States, cases of TB have been declining for more than 20 years (to fewer than 10,000 in 2013) rendering it of little interest to major pharmaceutical companies. Yet more than 11 million Americans are estimated to have latent TB infection with the potential to develop the disease. Current treatments are nearly 50 years old and involve a lengthy and costly drug-regimen of six months to two years. The response to an epidemic of drug-resistant tuberculosis in New York City that peaked in 1992 was estimated to have taken more than a decade and cost well over $1 billion to bring under control.

Abramovitch’s team uses novel approaches that have the potential to not only conquer TB but to provide new methods for understanding other drug-resistant diseases. For example, Abramovitch has employed a synthetic biosensor that glows in response to conditions that mimic TB infection. Developing biosensor strains has allowed the team to screen more than 890,000 molecular compounds to find likely candidates to inhibit TB disease.

Their ideas received seed funding from the Grand Challenges Explorations program funded by the Bill & Melinda Gates Foundation. Abramovitch received an initial $100,000 to conduct screenings. Recently, he became one of 15 researchers worldwide to receive a follow-up grant in the program. The new grant of $820,000 is directed toward testing selected, optimized compounds for their ability to block infection.

Schultz, a graduate of the College of Engineering who also received an MBA from the Broad College of Business, was a longtime executive for General Motors. When his wife Jean lost her battle with cancer, the family turned to the College of Human Medicine for ways to honor Jean’s relentless spirit as a community activist.

In 1997, the family, along with close friends, established the Jean P. Schultz Endowed Oncology Research Fund. In 2012, they amended their endowment to broaden support for innovative approaches to biomedical research. The family is committed to growing the endowment through annual donations.

Today, Abramovitch is one of four recipients of funding from the endowment.

The way Robert Schultz sees it, his family plays on a team that faces the equivalent of a Big Ten Championship, the Rose Bowl and the Final Four every day.

“Our opponents aren’t Michigan or Ohio State or Stanford,” he says. “The rivals we face together are deadly diseases.”

In the competition for federal and foundation funding, Abramovitch sees the difference that private support, such as that from the Schultz family, can make. With it, he was able to bring in an additional staff member to work on the project, generating additional data for his latest federal grant application.

“Sometimes it’s even small amounts of seed funding that allow you to do one or two more experiments. The last piece of important data you gain can put you over the top for receiving a long-term grant,” he says. “Seed funding is very important for a research lab.”

Learn more about the work of Robert Abramovitch.