Combating the ongoing tuberculosis epidemic is a major challenge in global health. 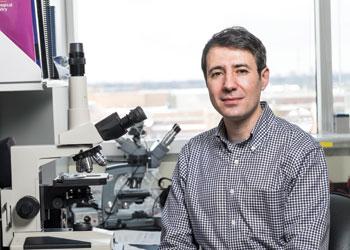 For his work on developing new treatments for tuberculosis, Assistant Professor Robert Abramovitch has earned a Phase II award through Grand Challenges Explorations, an initiative funded by the Bill & Melinda Gates Foundation.

Abramovitch of MSU’s Department of Microbiology and Molecular Genetics had won a Phase I award in 2012. In the round of Grand Challenges Explorations awards announced for Fall 2014, Abramovitch was the only winner of a Phase II award in the category of Synthetic Biology and one of only 15 Phase II winners worldwide in 2014.

“Combating the ongoing tuberculosis epidemic is a major challenge in global health,” said Abramovitch. “Currently, patients undergo a multidrug treatment regimen that lasts six months and has fueled the emergence of drug-resistant TB. We need to find new solutions to treat the disease and reduce the period of drug therapy.”

In Phase I, Abramovitch’s lab team screened more than 270,000 molecular compounds to find candidates that could hinder the disease’s ability to maintain a persistent state and allow drugs to treat the disease more quickly. They identified around 170. In Phase II, the team will carry forward with selected, optimized compounds, testing their ability to block chronic infection and characterizing the compounds that inhibit bacterial growth.

Phase I winners receive a two-year grant of $100,000. The Phase II Grand Challenges Explorations award received by Abramovitch is a two-year $820,000 grant.