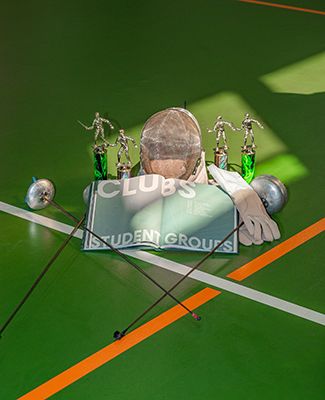 When it comes to a commitment to their recreational sport, members of MSU’s popular and highly successful fencing club might simply say: En Garde!

The club had one of its best years ever, earning a record-breaking number of regional awards and propelling several Spartans to the elimination rounds in the national tournament.

It’s not a surprising outcome for a club that boasts more than 60 members who routinely participate in intense, hours-long practices four nights a week. But playing a role too, were the 77 donors who made gifts to the club’s CrowdPower campaigns on National Giving Day on the Tuesday after Thanksgiving and the springtime Give Green Day in mid-March.

Family, friends and alumni surpassed the club’s fundraising goals for both days, raising more than $7,000. The funds enabled the hardworking Spartan fencers to travel to and compete in multiple tournaments.

Ceili Widmann, the club’s vice president, expresses the gratitude of the members this way: “Thank you for helping us get those regional and national wins.” And she parries with: “Thanks to you, I feel like I want to go win again!”