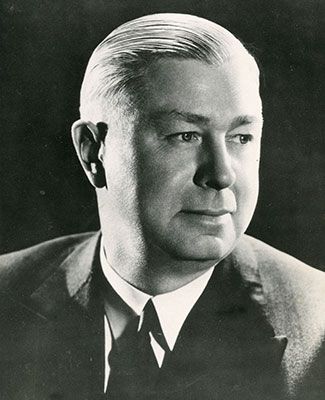 Thanks to a $2.3 million gift from the Forest Akers Trust, a state-of-the-art strength and conditioning facility is now serving MSU’s hardworking student-athletes.

It’s part of stunning upgrades recently completed that have transformed Munn Ice Arena and greatly enhanced the lives of MSU hockey players as well as studentathletes in numerous other sports. It’s also the latest in a long line of gifts from a trust that spans more than five decades, totals nearly $14 million in cumulative giving and honors a man who was somehow both expelled as a student and welcomed as a trusted overseer on what is now the MSU Board of Trustees.

As legend has it, a young Forest Akers, a baseball player at Michigan Agricultural College, was asked to leave in 1908 for lackluster academic performance as well as a propensity for campus hijinks. (He was believed—though he denied involvement—of being behind a powder keg explosion set off during a visit by President Theodore Roosevelt.) An older, and presumably wiser, Forest Akers redeemed himself through a long career in the burgeoning auto industry, where he rose through the ranks from car salesman to vice president for the Dodge Division of Chrysler Corporation. He also maintained his love of sports, becoming an avid golfer, and held no grudge against MSU. He once said of the decision to expel him: “They were never, in all their history, more right.”

By 1939, he had been elected to the state Board of Agriculture—the equivalent of today’s MSU Board of Trustees— where he served until 1957. Before his death in 1966, he donated land and money to build golf courses on campus, supported students with scholarships and established the Forest Akers Trust.

The name Forest Akers is familiar to every Spartan, thanks to the man and his trust. It’s on one of the largest residence halls, two picturesque golf courses, one of Berkowitz Complex’s impressive auxiliary gyms, some of the campus’s best learning spaces in Bessey Hall and a synthetic practice field that has transformed marching band practice and other athletic endeavors of MSU’s students. Additionally, the trust has provided funding for Hannah Professorships, support for building the Eli and Edythe Broad Art Museum and the Clara Bell Smith Student Athlete Academic Center and endowments to support student-athletes, entrepreneurship and education abroad.

If the things the trust has supported sound like a list of the university’s most critical enterprises, that is no coincidence. In accordance with Forest Aker’s wishes, the trust is set up solely for the benefit of MSU’s faculty and students, and funds projects and programs that are top priorities of the president and provost.

Every member of the four-person board for the Forest Akers Trust has deep MSU connections and each signed on for lifetime service. Roger Wilkinson is an MSU vice president emeritus and Stephen (Steve) Terry an assistant vice president emeritus, both for Finance and Operations and Treasurer. Nancy Craig is the former director of Investments and Trusts at MSU. Brian Breslin is a former member of the MSU Board of Trustees. All four are also MSU alumni.

“It’s a real honor to be a trustee of the Forest Akers Trust,” explained Steve. “Everything about it reflects a long association with MSU. We are entrusted with the means to help the university realize dreams, and it is exciting to see the impact.”

A longtime hockey fan, Steve said the latest gift from the trust is particularly gratifying for him.

“The new facilities are going to help with recruitment, and it is heartening to see hockey making a comeback,” he said.

Munn Ice Arena recently completed a $22.5M renovation to update and add much-needed amenities for MSU players and staff, and create a more welcoming entryway for fans, including a Ron Mason Hall of History. The Forest Akers Trust Strength and Conditioning Center means that student-athletes no longer have to trek down Red Cedar Road to the football building for conditioning. The new facility, together with a theater room for watching film, a space for studying, a place to practice shooting and brand-new locker rooms, will stand out to new recruits choosing among some of the best hockey programs in the country.

Spartan Hockey head coach Adam Nightingale, “We are grateful to the Forest Akers Trust for supporting our student-athletes through their philanthropy. Thanks to generous donors, we now have the finest college hockey facility in the country to recruit, train, and provide a transformative experience for players.”

It’s the newest iteration extending the long MSU legacy of the former student, sportsman, auto industry executive and trustee. Thinking of his intention to establish the Forest Akers Trust as a way to benefit MSU and its students, one might remark: “He was never, in all his history, more right!”

LEARN MORE about supporting the Munn Renovation Project by contacting Executive Associate Athletics Director and Senior Director of Development Rebecca Surian at surian@ath.msu.edu or by calling (517) 432-4610.