“We have seen firsthand that the hours of hard work that go into being a member of the band or serving an athletic team—while excelling academically too—build a Spartan with a heart of green." 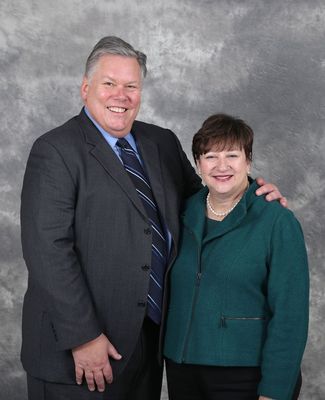 “We have seen firsthand that the hours of hard work that go into being a member of the band or serving an athletic team—while excelling academically too—build a Spartan with a heart of green."

If you think there has to be a story or two behind campaign volunteers Jim and Sherry Bradow’s $1.25 million gift to support the Spartan Marching Band, scholarships for student athletes and team mangers who model Spartan values, and an endowed professorship in the Eli Broad College of Business; you’d be right.

Jim, originally from Fort Wayne, Indiana, came to MSU by way of a golf scholarship. Sherry, from the Detroit area, followed family and high school classmates.

The couple met and became friends somewhere in between studying, football games, and playing euchre while eating Domino’s pizza until 3 a.m. in their Wilson Hall study lounge. Their majors, business for him and medical technology for her, didn’t much overlap. But they took an elective Art of the Film course together senior year.

“It seemed like we were getting university credit just for dating and watching movies,” Sherry says. “But meeting one another at MSU determined the course of our lives.”

After graduation, they married, started their careers in the Detroit area, and eventually moved to Texas, where Jim maintained his long career with Ernst & Ernst, now Ernst & Young. Over the years, Jim stayed in touch with his business college professors, first as he recruited students for his firm and then as an alumni leader.

Jim and Sherry saw the need for endowed faculty positions and designated a portion of their estate to fund a future professorship in the business college.

“Great professors teach not only academic knowledge but life knowledge that can be carried into real-world situations and solutions,” says Jim. “An outstanding professor can directly impact thousands of lives, and then their influence can become limitless.”

Jim and Sherry also stayed connected by traveling back to East Lansing on football weekends whenever they could.

Over time, the sights and sounds of the Spartan Marching Band have become especially personal for them. As students, they well remembered the tuba section booming out “Baby Elephant Walk” to the delight of the crowd. Music became a central theme in their family life. Jim played drums in a band with colleagues. Later, each of their three children learned to play instruments and marched in their high school band. Then their younger daughter, Susan, took it quite a few steps further.

Susan was diagnosed and aggressively treated for Hodgkin’s lymphoma during her junior year of high school. The experience led her to pursue social work in medicine, and to MSU’s renowned social work program. Determined to make the most of her time on campus, she performed in the band’s Color Guard and Winter Guard all four years, becoming the captain of both in her senior year.

Honoring Susan’s strength against difficult odds was among her parents’ highest wishes for their giving.

“We have seen firsthand that the hours of hard work that go into being a member of the band or serving an athletic team—while excelling academically too—build a Spartan with a heart of green,” says Sherry.

The band and scholarship portion of their gift is pledged in cash, to be put to work immediately. The endowed position in the Broad College is through a charitable bequest commitment.

Thanks to the Bradows’ generosity, the Spartan Marching Band, Spartan Athletics, and the Eli Broad College of Business will have new resources to do just that.

To explore any giving option at MSU, contact the University Development officer in your college or unit, call (517) 884-1000, or visit givingto.msu.edu.