In with the new, as a nod to the old

Munn Ice Arena is undergoing a $22.5M renovation—funded entirely through philanthropy—to update and add much-needed amenities for MSU players and staff, and create a more welcoming entryway for fans. 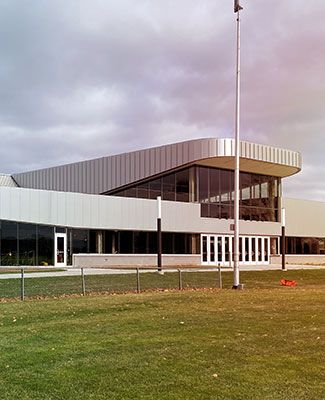 In with the new, as a nod to the old

Munn Ice Arena is undergoing a $22.5M renovation—funded entirely through philanthropy—to update and add much-needed amenities for MSU players and staff, and create a more welcoming entryway for fans.

Munn Ice Arena is getting old, but honestly, that’s kind of a compliment.

Completed in 1974, the low-lying, metal-sided building is without a doubt the only athletic facility in the U.S.—and possibly the entire world—that is tucked into the side of a documented 16,000-year-old prehistoric inland sand dune. (Not to mention that there’s a grove of pine trees growing atop the sand dune, making Munn one of the only places on campus where you can sing the lyrics to MSU Shadows, “beneath the pines we’ll gather,” and actually mean it.)

It is home to three national championship banners and nearly 80 alumni who went on to NHL careers, and the rafters are probably still rattling from the roar of 323 consecutive regular-season sellout crowds that had the building bursting at the seams from 1985 to 2004.

When Munn Ice Arena’s long-awaited renovation is complete, it will be the best of both worlds.

The 35,000-square-foot addition will bring offices, conference rooms, and administrative spaces out of the dark underbelly of the arena and into natural light on the main level.

A weight room and training room will mean that student-athletes won’t have to trek down Red Cedar Road to the football building for conditioning. There will be a theater room for watching film, a space for studying, a place to practice shooting and brand-new locker rooms that will stand out to new recruits choosing between some of the best hockey programs in the country.

And for the fans: a beautiful and well-marked “front door” at the building’s south entrance and an MSU hockey hall of fame to welcome them inside.

From a campus perspective, the Munn renovation also marks the culmination of a series of major athletic facilities upgrades in recent years: football and basketball, but also baseball, softball, soccer and golf have all benefited from new and improved practice spaces and playing venues.

The $22.5 million Munn renovation project is being funded solely through philanthropy, and while construction has largely been paused due to the COVID-19 pandemic, fundraising continues. 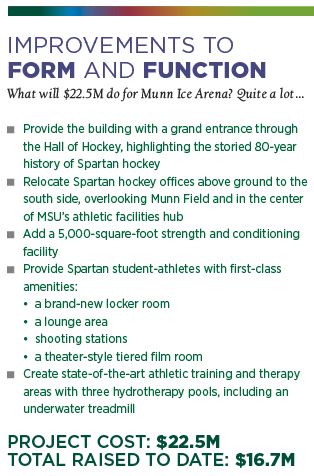 To date, $16.7 million has been raised. Hockey alumnus Gary Harpell and five other donors, including Tom Izzo and the Forest Akers Trust, have committed over $1M each to the facility. In all, 89 donors have stepped up with gifts of $10,000 or more. Many of those gifts will be acknowledged by named spaces in the building, from the hall of honor at the entrance, to the coaches’ offices, to the locker rooms, to each individual locker inside—and there are still more opportunities for donors and fans to leave their mark.

Plenty of people will try to call this the beginning of a new era for Spartan hockey. And in a way, it is. But it might also be safe to say that this is an effort to reclaim an old era when, win or lose, hockey was the hottest ticket in town.

That part of Munn Ice Arena—where it’s night two of a home-and-home against UofM, and MSU is winning and the students are going insane in the northeast corner and That One Guy is yelling at the refs, and That Other Guy is dancing to the Spartan Brass during intermission, and the whole place feels like the roof might pop off when the clock finally runs out and we’ve swept the series? That part has always been there, and it can only get better from here.

Alumnus and former MSU hockey player Gary Harpell ('82) walked on to the team as a freshman in 1978, and the feeling he had the first time he saw the ice—and the person he became after four years of playing on it—is the reason he’s become such an enthusiastic champion for the project.

Since 2016, Harpell has given more than $1 million to the project, and has volunteered his time as part of a committee of fellow Spartan hockey alumni who are helping to drum up support and move the renovation and fundraising efforts forward.

He spoke recently about why this project means so much to him:

“Walking on and making that team in 1978 was the fulfillment of many, many years of dreaming, and a goal of mine to play D1 college hockey. I proved to myself that if I set my mind to something, I could really achieve it. I want that for everybody that comes through Michigan State.

"Making that team in 1978 was the springboard for me to be able to take risks. It gave me the confidence that I could go on and do pretty much whatever I wanted to do. I used it in my professional life, in my personal life, it had a profound effect on me.

"For me, investing in the Munn renovation project has been a little bit like taking a slap shot off the ankle to save the game. It hurt a bit when I first blocked the shot—when I first made the commitment. But as time goes on, the pain subsides, and what you’re left with is this incredible feeling. It’s indescribable, the amount of pride that I have in what’s happening at Michigan State and in the hockey program.”

LEARN MORE about supporting the Munn Renovation Project by contacting Associate Athletics Director and Director of Major Gifts Mark Schoenl at mschoenl@ath.msu.edu or by calling 517-432-4610.