“I wanted to say to the parasite ‘Ha! You never thought we’d get an MRI, did you?’” 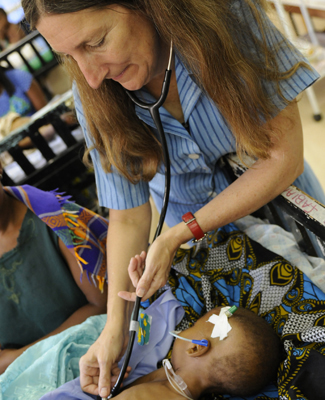 “I wanted to say to the parasite ‘Ha! You never thought we’d get an MRI, did you?’”

“This is an extraordinary gift,” said Terrie Taylor, University Distinguished Professor, MSU College of Osteopathic Medicine. “It’s difficult to predict the impact of GE’s gift and what it will mean in the effort to understand and find treatments for diseases that are devastating across the African continent and in other parts of the world.”

Taylor was speaking in 2007 about GE Healthcare’s donation to Michigan State University of a magnetic resonance imaging (MRI) scanner for medical research and patient care in Malawi.

In less than a decade, that gift has led to a great leap forward in understanding how cerebral malaria annually kills more than half a million children in Africa.

“We discovered that some children with cerebral malaria develop massively swollen brains, and those are the children who die,” Taylor said.

Taylor and her research team found that the brain becomes so swollen it is forced out through the bottom of the skull and compresses the brain stem. This pressure causes the children to stop breathing and die.

While increased efforts targeting malaria elimination and eradication have had some effect on malaria infection and illness, death rates from malaria are still too high, Taylor said.

“It’s gut-wrenching when children die, but what keeps us going is that we are making progress against this Voldemort of parasites,” Taylor said. “It’s been an elusive quarry, but I think we have it cornered.”

How Taylor and her team found the brain swelling

In 2008, the GE Healthcare MRI was installed in a $400,000 building constructed by the MSU College of Osteopathic Medicine at the Queen Elizabeth Hospital in Blantyre, Malawi, where Taylor spends six months of every year treating and studying children with malaria.

MRI is an important diagnostic tool that is so common in developed countries it’s even used on family pets. But for the people of Malawi and neighboring parts of Mozambique before 2008, the closest MRI was 1,000 miles away.

With the help of MSU researchers, including Colleen Hammond and Matt Latourette in the Department of Radiology, Taylor and her team used the MRI to view brain images from hundreds of children with cerebral malaria, comparing findings in those who died to those who survived. That’s when they made the discovery.

“We found that survivors’ brains either had never swollen or decreased in size after two to three days. This was a triumphant moment,” Taylor said. “I wanted to say to the parasite ‘Ha! You never thought we’d get an MRI, did you?’”

“MRI is an amazing tool for imaging the body, especially the brain, with great detail,” said Eric Stahre, president and CEO of Global Magnetic Resonance Imaging at GE Healthcare. “GE Healthcare is committed to bringing new technology like MRI to rural areas and developing economies to increase access to life saving innovations.”

“We are very proud to have been a part of Dr. Taylor’s research on a topic as important as malaria,” Stahre said. “Researchers like Dr. Taylor are expanding our understanding of this disease, which I'm confident will lead to better care.”

Taylor said her team’s next research steps will proceed on two parallel tracks. “One is to identify the causes of the brain swelling. We have four hypotheses and need to understand the relative contributions of each. We could then target treatment to the important causes.”

The second vital step Taylor emphasized is a trial of assisted ventilation. “This is based on our observations that kids die of a sudden respiratory arrest because the brain is so swollen,” she said.

The research was funded by the National Institute of Allergy and Infectious Diseases (NIAID), of the National Institutes of Health. In 2010, NIAID established a network of 10 International Centers of Excellence for Malaria Research (ICEMRs) located around the globe in malaria-endemic regions. For the Malawi ICEMR, Michigan State University was selected as lead institution with Terrie Taylor as principal investigator.

For more information on making a gift to support the research of Dr. Terrie Taylor and her team, contact Director of Development for the College of Osteopathic Medicine Chris Surian at (517) 355-8355 or surianc@msu.edu.