"It was truly an honor to receive this scholarship and it felt so rewarding that my enthusiasm and passion for physiology was recognized. I will be forever grateful for it." — Rachel Brock 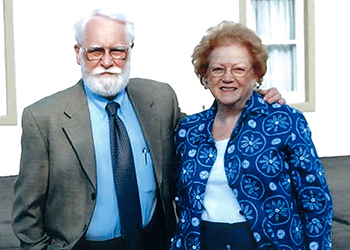 If you took physiology at MSU between 1967 and 2011, you probably knew Professor Thomas Adams. He taught an estimated 16,000 students in his career.

Right up until his retirement in January 2011 at the age of 80, Adams was popular not only as a great professor but also as a highly regarded advisor and mentor.

After his death in August 2011, his wife, Peggy, established the Thomas Adams Memorial Scholarship to honor his love of learning and dedication to helping students achieve success. Thanks to her initial gift, coupled with the continued support of the Adams family and former students of Dr. Adams, the fund is now valued at over $206,000.

Recipients of the scholarship happily talk about how much it has meant to them.

“As undergraduate research is often not a paid endeavor, this scholarship helped me and my family make ends meet while I worked in a lab,” says Kevin Kelly, the inaugural recipient in 2013-14. “I am incredibly honored to have been a recipient of this award and so thankful for the opportunities that it opened up for me.” He completed his master’s degree at MSU in 2015, earned his Ph.D. degree in biomedical sciences at Mayo Clinic, and hopes to find a teaching or a postdoctoral position when he finishes his studies in 2019.

Rachel Brock, 2014-15 recipient, says, “It was truly an honor to receive this scholarship and it felt so rewarding that my enthusiasm and passion for physiology was recognized. I will be forever grateful for it.” After graduating from MSU, Rachel earned her master’s degree from Duke University and currently works as a pathologist assistant.

Clarissa Richardson, 2016-17 recipient adds, “The generosity of the Adams family facilitated the enrichment of my undergraduate experience through research in the laboratory.” She plans to pursue a master’s in physician assistant studies.

Each spring, Peggy, along with the Adamses’ grown children, son Tom and daughter Sandy, attend the Department of Physiology’s annual reception where they have the opportunity to meet some of the Adams Scholarship recipients.

“It has been so rewarding to establish this scholarship,” Peggy Adams says. “It helps us stay connected to MSU; we’re talking about a 40+ year connection with the university, and to be able to continue it in this way has been wonderful.”