Preparing the Next Generation 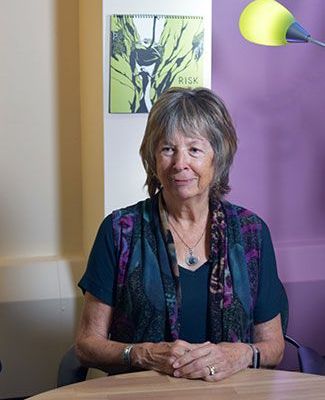 Preparing the Next Generation

Success isn’t measured in how much you achieve or even how high you rise in the ranks. Success also comes from leaving things in good order and in good hands.

Tracy Dobson, retired professor, and one of the founding faculty in the Center for Gender in Global Context at MSU, has had plenty of success by every measure. The Center is flourishing. An undergraduate award is named for her there and she leads by example in making annual gifts to support a new generation of faculty, who stand on her shoulders.

Her younger self could not have imagined any of this.

Her first job at MSU was as a secretary in the Anthropology Department. She was 22 and working to support her husband, who was in graduate school. She saw women her age doing amazing things and getting Ph.D.s. It opened her eyes.

As a French major, she says she wasn’t in a position to do a lot of doctoral programs, but she knew she cared about the environment and that she could get into law school at the University of Michigan.

If seeing women like her seeking Ph.D.s was eye opening, taking a course called Women and the Law was a downright epiphany. “I learned it wasn’t just me,” she says. “Every woman was experiencing the effects of inequality.”

She became a lawyer and worked on environmental and consumer issues for the State of Michigan. But MSU and an academic career were calling, and she soon landed a position teaching business law, later transitioning to MSU’s Department of Fisheries and Wildlife, which accommodated all of her passions: gender, justice and environmental change.

“We are all deeply connected to each other and to the environment,” she says. “When we show respect for that connection, our species will have a greater opportunity to continue to live on this planet.”

She developed her own Women and the Law course, her “ministry,” and revised and grew it throughout her tenure. Along the way, she connected with other faculty who shared her interests. When the center began to take form, she was all in.

Tracy’s legacy at MSU encompassed family too. Her son also was passionate about social justice and the environment. He was a law student in the MSU College of Law, planning to help indigenous people, when he died unexpectedly at the age of 31. The Noah Dobson Cooper Scholarship Award in the College of Law, established by his parents, honors his life.

Retirement has freed Tracy to become a self-described, full-time activist. But she keeps an eye on the center’s activities.

“It knocks me off my feet, the quality of the people that are in charge now,” says Tracy. “It is heartwarming and reassuring to see the growth in students and faculty participation. And I want to do what I can to help them raise the next generation of young people, who will be in charge in short order.”

A Force for Creativity, Discovery, and Learning, An Engine of Opportunity