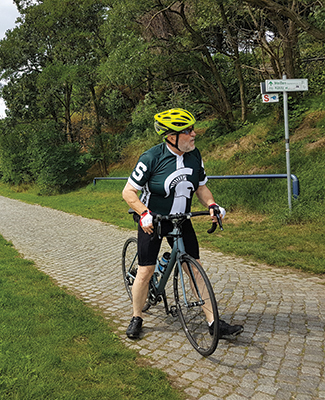 George Melnik (’69) grew up knowing one thing for certain: he was not going to let his circumstances dictate the rest of his life.

The son of Soviet refugees, George was born in a displaced persons camp in Germany before his family immigrated to the United States in 1952 and settled in Pontiac, Michigan. When his mother unexpectedly passed away later that year, George’s father was left to raise their young family and, well, his childhood wasn’t great.

That’s why he chose Michigan State. It was his chance to get away from home, and get on a new path.

“My situation made going to college difficult, but MSU was an inviting and nurturing environment, and a new adventure,” George says. He chose a course of study in the Justin Morrill College, which he liked for its academic flexibility and emphasis on languages (he grew up speaking Russian).

After his freshman year, he spent the summer working at his hometown McDonald’s to earn money for next year’s tuition.

To this day, he’s not sure what would’ve happened to him if Lillian McMahon hadn’t stepped in.

Lillian McMahon was his boss at McDonald’s, and she knew a thing or two about getting ahead. She’d started working for McDonald’s as a secretary for founder Ray Kroc. By 1960, she was the first woman in company history to own a McDonald’s franchise.

She wouldn’t hear of George turning his back on a college degree. So she offered him a loan. He accepted, and was able to return to MSU.

Later, he balanced classes with a second-shift job at the Oldsmobile plant to pay his bills. He finished his degree in four years, graduated, and continued to work through graduate school.

He earned a PhD. He joined the faculty in the College of Pharmacy at the University of Texas at Austin. And, he paid back Lillian McMahon.

“I never saw her again after that summer at McDonald’s,” George says. “But, I did write her a thank you card. I put a check inside, and my business card, and I wrote that if it wasn’t for her, and her generosity, none of this would’ve been possible.”

Now, George is paying it forward, and making sure Lillian’s generosity is never forgotten.

He has made a gift to the Residential College in the Arts and Humanities—the largest single gift RCAH has ever received—to create the Lillian McMahon Endowed Scholarship.

Melnik’s gift, which has earned him recognition in both the Snyder and Landon societies, is the combination of a charitable bequest through his estate plans, and a securities pledge that will start generating scholarship funds immediately, to help a new generation of humanities students.

“I want them to know that it doesn’t matter where you came from,” George says. With hard work and a humanities degree—which, George says, he put to use every single day—they, too, can change their circumstances.

And if they, like him, need a little help, he’ll be their Lillian McMahon.

For more information about making a gift to the Residential College in the Arts and Humanities, contact Director of Development Emily Fijol at fijol@msu.edu, or call (517) 884-5997.