Nwando Achebe was one of 22 faculty to be newly invested in an endowed faculty position. 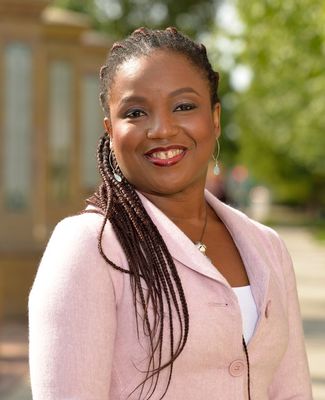 Nwando Achebe was one of 22 faculty to be newly invested in an endowed faculty position.

Michigan State was almost a predestined landing place for one of the world’s leading scholars of African history. But then, Nwando Achebe has always set her sights high.

So when the offer from MSU came to the up-and-coming Africanist, there was little the College of William and Mary could do to keep her from relocating to East Lansing.

Achebe joined the MSU faculty in 2005, made full professor in 2010, and this year, as her department became U.S. News & World Report’s top-ranked program in African History, she became the Jack and Margaret Sweet Endowed Professor of History.

“MSU is the singular best place I could be,” Achebe says. “It is hard to put into words what it means to me to be at an institution that values what it is that I do. In most institutions, we Africanists are the othered. At MSU, we are at the center.”

MSU’s commitment in Africa spans more than five decades, including helping to found the University of Nigeria, in the community where Achebe was raised. Today, Achebe is one of 300-plus faculty at MSU who are engaged with work in Africa, more than anywhere in the United States. None of this could have happened without resources, says History Department Chairperson Walter Hawthorne.

“To recruit and retain the best faculty, and to build and maintain a program that is nationally ranked, requires permanent support from endowments,” Hawthorne explains. “We are grateful to Jack and Margaret Sweet for endowing a faculty position in history, which recognizes faculty achievement, provides support for their research, and sends a signal to the world that we as an institution value this.”

Her father, the late Professor Chinua Achebe, gained worldwide attention for his novel Things Fall Apart. Her mother, Professor Christie Chinwe Achebe, was the first female full professor and dean of education at the University of Nigeria.

“I see myself as a missionary in reverse,” Nwando Achebe says. “It is my job to bring Africa to the rest of the world, the way that my parents did. And I thank Providence every day for being born into the family I was born into.”

On September 22, Achebe joined 21 other esteemed colleagues in an investiture ceremony to honor faculty newly named to endowed positions or MSU Foundation professorships.

One of the most important Empower Extraordinary campaign goals is to create 100 new endowed faculty positions. To date 72 new positions have been established. These positions are supporting some of the best teachers, researchers, and problem-solvers with the resources they need to take their life’s work to the next level.

Achebe recently became the faculty excellence advocate for the College of Social Science and the founding editor for the Journal of West African History. As to where she goes next, her sights are ever high.