On campus since 1873, The Rock is an ever-changing expression of MSU spirit. 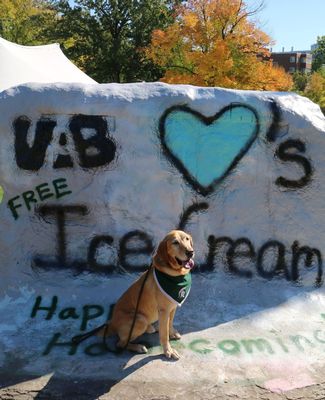 On campus since 1873, The Rock is an ever-changing expression of MSU spirit.

Beaumont Tower stands tall—a monument in the middle of Michigan State University’s campus. The Sparty Statue projects strength—an iconic structure representing Spartan will. The Rock, while small in stature, stands the test of time, too—it is a symbol of MSU spirit, creativity and character.

The Rock, located north of the Red Cedar off Farm Lane, is ever-changing, painted almost daily like a billboard for student events. It runs a gamut, with students and community members painting it with everything from wedding proposals to birthday wishes.

Originally, it was called the stone. Back in 1873, when it was donated to Michigan State University by the Class of 1873, it was placed in a grove of trees near where Beaumont Tower was later built. It stayed there for 112 years, and in the 1940s and 50s, turned into the “Engagement Rock.” According to legend, if someone wanted to propose, they would take their significant other to the Rock and pop the question. There was a bench nearby, and it was said that only engaged or married couples could sit on the bench.

In the 1960s, the Rock became a political platform. Students painted the Rock, sometimes upsetting alumni and other students. Problems also arose when paint missed the canvas, spilling over to nearby trees and sidewalks.

So, in 1985, the university moved the Rock to its current home on the Red Cedar. There, students paint the rock almost daily.

The Rock plays more than just host to murals and messages, sometimes it even inspires art. In fact, here is a poem from The Rock’s point of view, performed by Karen Vance, College of Arts and Letters Class of 2018.

The Rock has been a symbol of MSU spirit since 1873. Whether home to engagements or protests, it is a staple not only as a part of MSU’s campus, but the university’s history.

The header of this article is from a painting located in Wells Hall titled “Pet Rock” by alum Jon Anthony.