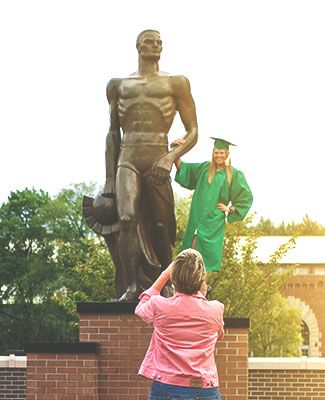 The parade starts long before the processional.

The parade of students, that is, wearing full green graduation garb, marching purposefully in packs, followed by a photographer or a doting friend with a fancy camera.

They set out across campus on any given sunny afternoon between mid-April and the all-important commencement weekend in May, to capture whatever it is about themselves that matters as their Spartan experience comes to a close:

“These are some of the best friends I’ve ever had.”

(Or maybe it’s simpler than that. Maybe it’s just to snap a good pic for the ‘gram. And that’s okay, too.)

They go to the Library bridge, to have photos taken from both directions. Facing south, the iconic helmet logo looms large on the stadium scoreboards in the background—an echo of “GO GREEN, GO WHITE,” and of all the time they spent feeling Spartan spirit with all their hearts. Facing north, old, tall trees shade the Red Cedar River, and the brick façade of the library serves as a reminder of why they were really here.

They go to the Spartan statue where, one by one, they join him on his platform. Standing on the highest tier of the brick base, a student of average height measures over nine feet tall. But the Spartan is nine feet tall all by himself. He’ll always be bigger than them, but when they stand with him, they’re still bigger than everybody on the ground.

At this point, it’s sunset, but they still have one more landmark to hit: the landscaped half-wall in front of the football building, with its bold “Michigan State University” official lettering.

There they stand, alone, or lined up hand-in-hand with their friends, as the photographer risks life and limb, teetering on the edge of one of campus’s busiest intersections, to frame the perfect shot.

Then they jump. Green robes flowing in the breeze. Hats flying through the air. Fists raised in victory. Kind of like the act of graduating itself. The photographer captures that, too.