MSU and Apple, with support from the Gilbert Family Foundation and the Rock Family of Companies, have partnered to open an Apple Developer Academy in Detroit, which will create new opportunities for careers in the iOS app economy. 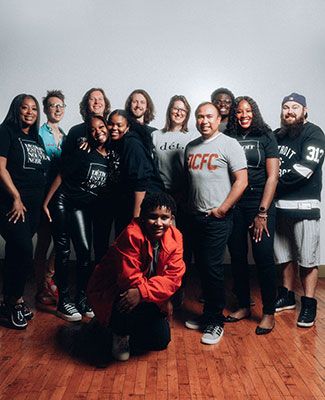 MSU and Apple, with support from the Gilbert Family Foundation and the Rock Family of Companies, have partnered to open an Apple Developer Academy in Detroit, which will create new opportunities for careers in the iOS app economy.

As a prominent public institution, Michigan State University has long prioritized the idea of meeting people where they are—of touching lives and impacting communities in ways that don’t necessarily involve a bachelor’s degree and all the trappings that come with it.

It’s right there, in the mission statement and in the strategic plan, that MSU is in the business of advancing outreach, engagement and economic development activities—especially if those activities are innovative, research-driven or “lead to a better quality of life for individuals and communities, at home and around the world.”

You can see this in the vast offerings of the MSU Extension, which has a presence in every county throughout the state.

You can see it in Michigan State’s partnerships with health care providers in Flint, Detroit, Lansing, Grand Rapids and beyond.

And you can see it in the hundreds of partnerships MSU has forged worldwide to contribute the expertise and extra hands needed to address big challenges.

Now, you’ll be able to see it in the Apple Developer Academy in Detroit, too.

The academy is a one-year program that provides adult students with the coding, design, entrepreneurship and essential professional skills they need to pursue a career in the app economy. It is free to attend, anyone over 18 can apply, and the program requires a time commitment of 20 hours per week. Upon completion, Apple Developer Academy graduates will be workplace-ready for a job in tech, or to pursue opportunities of their interest.

A commitment to diversity, equity, inclusion and justice

This partnership is representative of a shared commitment between Apple, MSU and the Rock Family of Companies to make diversity, equity and inclusion a cornerstone of strategic action and organizational culture for their respective institutions.

Apple launched its Racial Equity and Justice Initiative (REJI) at the beginning of 2021, and the Apple Developer Academy in Detroit is one of its flagship projects—the mission of which is to expand opportunities for communities of color across the country and empower a new generation of diverse tech leaders and entrepreneurs.

According to U.S. census data, there are more than 50,000 Black-owned businesses in Detroit, and the city has a thriving community of Black entrepreneurs and developers within its ever-growing tech scene.

Instead of attempting to funnel aspiring tech entrepreneurs, coders and creators into a traditional “prerequisites required” degree program on a brick-and-mortar campus, the Apple Developer Academy meets them where they are, educationally AND geographically, to prepare them with in-demand skills for a tech-driven future. No previous educational experience—or work experience in tech—is required, and tuition to the Academy is 100% free.

And while the student cohort is itself a diverse group—104 students, ranging in age from 18 to 60, all from Detroit proper and the metro area—the program’s mentors and leadership also pull from traditionally underrepresented groups. The group of mentors for this inaugural cohort matches the city’s demographics, and is led by Dr. Sarah Gretter—previously associate director of MSU’s Hub for Innovation in Learning and Technology.

The growth of a partnership

Gretter, in fact, has been a key player in this collaborative partnership. It began several years ago, with the launch of the iOS Design Lab on campus, where students from diverse academic backgrounds and interests can supplement their degree programs through the exploration of coding, design and entrepreneurship within the Apple ecosystem.

The iOS Design Lab’s success helped lay the foundation for the Apple Developer Academy, because it proved that MSU was willing, able and equipped to think outside the box in terms of delivering innovative, hands-on learning opportunities.

Michigan State’s deep connections throughout the state of Michigan will be a boon to Developer Academy graduates, too. The university is already working with state companies and partners who may be interested in hiring from the pool of talent the Apple Developer Academy is known to produce. Detroit has rapidly become the tech hub of the Midwest, and the COVID-19 pandemic has only increased the need for companies to have a digital presence—so the environment is ripe for job candidates who can nimbly navigate the technology.

Tying it all together—for MSU and for Detroit

There may be no more prominent commonality between Michigan State, the City of Detroit, and the world of technology and entrepreneurship than MSU alumnus, chairman and founder of Rocket Companies Dan Gilbert and his wife, alumna Jennifer Gilbert.

In the summer of 2021, the Gilbert Family Foundation, in partnership with the Rock Family of Companies, announced plans to support MSU and the Apple Developer Academy in Detroit in a major way.

The multimillion-dollar grant from the Gilbert Family Foundation will help fund the academy’s general operations and expenses, including program development, infrastructure and staffing.

Meanwhile, the Rock Family of Companies—made up of nearly 100 separate businesses spanning fintech, sports, entertainment, real estate, technology startups and more, including Rocket Companies, Detroit Venture Partners, the Rocket Community Fund, Grand Circus and StockX—will propose mentor and student pathways to and from the academy, contribute to the academy program through guest presentations and networking events, and present career pathways for interested graduates.

“Apple’s arrival in Detroit has the potential to impact generations of Detroiters by offering new, unique pathways to join the tech renaissance,” says Dan Gilbert. “As Detroit’s tech sector strengthens, we need to invest in intentional programming like the academy to advance equity and remove barriers to entry for members of our community. Jennifer and I are proud to be partnered with our alma mater, MSU, and Apple to realize this vision.”

That Michigan State is helping to build a program that encourages learning outside the traditional four-year degree model—and that Apple has created a welcoming environment for all who show interest and aptitude to put their skills to work in the app economy—says something about both institutions’ commitment to breaking down the systemic barriers to education, to success, to turning a good idea into a sustainable livelihood.

“Apple and MSU are both taking a stance on diversity, equity and inclusion, and we’re embedding this into the fabric of every aspect of the academy,” Gretter says. “From the way we hire staff, to the way the applications were written, to the way we’re structuring the activities we do with students on a daily basis.

“We’re in a time when we need to rethink and reinforce new and innovative ways to deliver education, and make it adaptable to 21st century realities—we’re following the trajectory MSU has always been on, rethinking what the land-grant mission looks like for our current time.”

The Gilberts: a snapshot

Dan Gilbert (’83) is the founder and chairman of Rocket Mortgage, the nation’s largest mortgage lender, and Rocket Companies, a Detroit-based company that provides simple, fast and trusted digital solutions for complex transactions, which went public on August 6, 2020. Gilbert also is the chairman of the Cleveland Cavaliers and the founder and chairman of Rock Ventures, a portfolio of more than 100 technology businesses and real estate investments spanning the country and employing more than 40,000 team members—including more than 17,000 in Detroit’s urban core.

Jennifer Gilbert (’90) is director and board member of Rocket Companies. In addition to serving as a director and member of the board for Rocket Companies, Jennifer Gilbert is the founder of Amber Engine, a home furnishings services and solutions technology company. She also founded POPHOUSE, a Detroit-based design studio focused on creating strategic, unconventional and human-centric spaces. Additionally, Jennifer Gilbert is president of NF Forward and serves as chair of the Board of Governors of the Cranbrook Academy of Art and Art Museum.

The Gilbert Family Foundation is devoted to two pillars: curing neurofibromatosis (NF), a complex genetic disorder; and building opportunity and equity for residents of Detroit, Cleveland and where Rocket Companies has footprints. In May 2021, GFF announced a $500M commitment, in partnership with the Rocket Community Fund, toward Detroit’s neighborhoods to be deployed for initiatives and partnerships that will remove systematic barriers to opportunity and inclusion for residents. This commitment, while separate from the grant for the Apple Developer Academy, shares the spirit and intent of GFF’s partnership with Michigan State and Apple.

LEARN MORE about how you can support the Apple Developer Academy by contacting Principal Gifts Executive Director Malissa Burke at burkemal@msu.edu or by phone at (517) 884-1020.