Right at Home in Hospitality

The decision to start giving back to the place that started it all was easy and obvious, says Alumnus Tom LaTour. 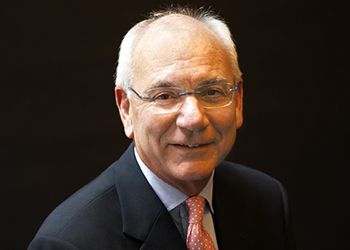 Growing up in Lansing, where MSU’s campus was as familiar and welcoming a place as his own backyard, Tom LaTour was exposed to enough experiences that his future could’ve taken off in any number of directions.

But it was his first job, as a dishwasher at MSU’s Kellogg Center at the age of fourteen, that captured his full attention and steered him in the direction of hospitality business.

It was an interesting place for a teenager to work, surrounded by students, teachers and industry leaders. “At that very early age, I was introduced to hospitality business in its most optimal format: a continuing education hotel,” Tom (’66, Business) says. “It was a very rich environment, which rewarded curious minds and people who wanted to work hard.”

Later, as a student in The School of Hospitality Business, Tom also picked up on a certain emotional aspect to working in the Kellogg Center. It could’ve been the way the hotel crafted a special experience for both its guests and its employees, but it could also have been the fact that Kellogg, the local hotel on the local college campus in Tom’s hometown, felt like home.

It was a feeling he wanted to replicate.

It was the early 1980s, after nearly two decades of work for enormous hotel and food service brands affiliated with the airline and railway industries, when Tom finally had his chance. Bill Kimpton, a hotelier who had just opened the first-ever “boutique hotel” in San Francisco, brought Tom on as president of Kimpton Hotels and together, they began to fill this very specific niche.

“Joining Kimpton Hotels marked my departure from 1700-room hotels to much smaller 100-room hotels, where I could interact with every employee and every guest, every day,” Tom says. He could focus on creating an experience, at properties that were small and uniquely outfitted, with amenities that aimed to delight—and make a hotel stay feel more like a stay in the stylish home of a dear friend.

“That was my AH-HA moment, when I truly realized what hospitality was all about. It’s about making those emotional connections,” Tom says.

The decision to start giving back to the place that started it all was easy and obvious. “You reach a certain point in your career where you start turning your attention to how you can share your success with others,” Tom says. And so, the LaTour Family Endowment Fund for Student Travel in The School of Hospitality Business was born.

“Ron Cichy—now director emeritus of The School of Hospitality Business—came up with the idea that the school needed a fund to help cover student travel, and it really struck a chord with me,” Tom says. “I remember traveling to restaurant shows in Chicago and hotel shows in New York as a student. Those experiences had a long-term impact on me, and I wanted them to have a long-term impact on today’s students, too.”

Over the years, Tom—whose giving has earned him recognition as a member of the Snyder Society—has continued to add to the fund, inspired by the notes he receives from students thankful for the opportunity to travel. “More money in the fund equals more airplane tickets, which equals more experiences for students,” says Tom.

Experiences that will, hopefully, give hospitality business students a level of comfort in the world outside of MSU and the Kellogg Center, and help them find the same balance that has made Tom’s career so successful: an understanding that people can still feel “at home,” no matter how far from home they travel.

Learn more about making a gift to The School of Hospitality Business by contacting Associate Director of Development Mary Shirkey at shirkey@broad.msu.edu or by calling (517) 432-7440.