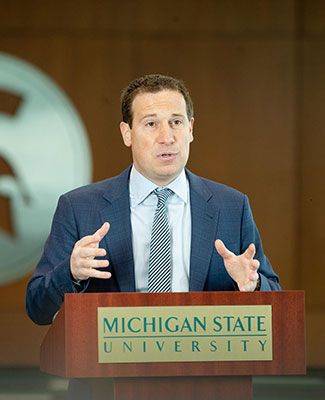 When alumnus and former MSU basketball player Mat Ishbia made his $32 million commitment to MSU Athletics in early 2021, he mentioned wanting to honor his family, his teammates, and the education he received in the Eli Broad College of Business that set him up for his future. But most of all, he wanted to honor Tom Izzo.

Ishbia credits much of his success in business (he is the current chairman, president and CEO of United Wholesale Mortgage, the largest wholesale mortgage company in the nation) to the lessons he learned at MSU, and the time he spent playing for and coaching with coach Tom Izzo. Ishbia was on the men's basketball team from 1998-2002, and worked as a student assistant coach during the 2002-2003 season, where he had the privilege to learn first-hand from Coach Izzo.

"This donation is not about me,” Ishbia says. “This is to give credit to and thank coach Tom Izzo, the business school and Michigan State University for the incredible impact they have had on my life.”

Honoring the coach/player, mentor/mentee relationship between Coach Izzo and himself, part of Ishbia’s commitment is $2 million towards the Men's Basketball Excellence Fund to be used at the discretion of the head coach to support the program.

READ the full story on Mat Ishbia’s $32 million commitment—including details on the many ways it will impact athletics facilities, scholarships, and the student-athlete experience at MSU.