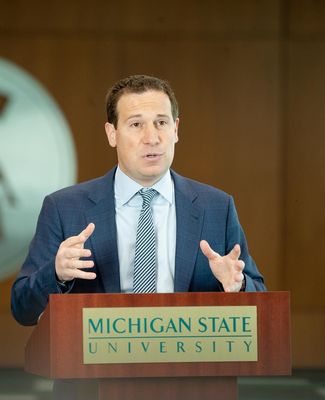 Michigan State University received a $32 million commitment from alumnus Mat Ishbia that will benefit MSU Athletics in a variety of meaningful ways, including a significant expansion of athletic facilities and funds to support career services dedicated to student-athletes as well as to enhance the university's athletic excellence overall. The commitment, announced on Feb. 4, 2021, is the largest single cash commitment in MSU's history from an individual.

For Ishbia, it is all about family, including his Spartan family. A 2003 graduate of the Eli Broad College of Business and four-year member of the Spartan men's basketball team, he made the commitment in honor of his parents, his teammates and head men's basketball coach Tom Izzo.

"On behalf of the university, we are deeply grateful to Mat and his generosity and significant commitment to a place that clearly had a strong impact on his life," said MSU President Samuel L. Stanley Jr., M.D.  "This is the testimony of being a Spartan – of hard work and giving back to help all Spartans also have a transformational experience at our institution."

Ishbia, the current chairman, president and CEO of United Wholesale Mortgage (UWM), the largest wholesale mortgage company in the nation for six years running, and No. 2 overall mortgage lender, recently guided his company — which was a 12-person family business when he joined in 2003 and is now a team of over 8,000 people — to the biggest Special Purpose Acquisition Companies (SPAC) merger in United States history.  On January 22, 2021, Ishbia rang the bell at the New York Stock Exchange signifying the momentous accomplishment.

He credits much of his success in business to the lessons learned at MSU and his time spent playing for and coaching with coach Tom Izzo. Ishbia was a member of the 2000 National Championship team led by All-American Mateen Cleaves. He was on the men's basketball team from 1998-2002 where he was a three-time letter winner, a three-time Academic All-Big Ten honoree, and a member of three straight Big Ten Championship (1999-2001) and Final Four (1999-2001) teams, as well as a student assistant coach (2002-2003) where he had the privilege to learn first-hand from Coach Izzo. As a senior, his teammates voted him the Most Inspirational Player. He recently published a book titled Running the Corporate Offense, highlighting the lessons he learned about leadership and the importance of team exemplified by Izzo, and how he applies those to running a successful business today.

"This donation is not about me, this is to give credit to and thank coach Tom Izzo, the business school and Michigan State University for the incredible impact they have had on my life," said Ishbia.

Honoring the coach/player, mentor/mentee relationship between Coach Izzo and himself, Ishbia will give $2 million towards the Men's Basketball Excellence Fund to be used at the discretion of the head coach to support the program.

"This gift speaks volumes to Mat's character and the way he runs his business today; always focusing on creating a family atmosphere and being there for one another. His generosity will benefit the Spartan family for years to come, enriching the lives of so many Spartans well beyond their time at Michigan State. I am honored and humbled by his gift and thankful for his philanthropy, but I am more proud of the man he is. Mat's parents always supported Mat throughout his college career, as Mat has done with his own kids, and with his gift he will support the life journey of so many more Spartans. Like me, he's been lucky enough to live his dreams. Today he's helping countless Spartans to live theirs. "

The largest portion of the Ishbia commitment ($20M) will be football-focused, providing resources to construct an expansion of the Skandalaris Football Center to include improving the football auditorium, expanding the weight room and creating new player lockers, informal meeting spaces, and recovery modalities consistent with the country's best programs, as well as a dining and nutrition area to give head football coach Mel Tucker resources to compete for championships.

"Facilities show a commitment to excellence," said Tucker. "Mat's gift will make a profound impact on our program and is a statement that Michigan State is relentless about excellence, both on and off the field, in our pursuit of championships.

"Recruits and student-athletes are comparing our campus and our facilities to the other top programs in the country. Thanks to Mat's generosity and vision, we will have a state-of-the-art football facility that will be among the best in the nation. We're incredibly excited to unveil these enhancements in the near future.

"I'm honored to be the head coach in a building named after Tom Izzo. Having his name permanently associated with our program will be a living testament to his values of grit, toughness and passion, which is what this Spartan program is all about. I couldn't be more excited for our program right now."

Additionally, $2 million of Ishbia's commitment will create the Spartan For Life Fund focused on leadership and career development to serve as a springboard for all student-athletes to find employment after graduation and to assist with life-long career opportunities.

"I'm extremely excited about the Spartan for Life Fund for current and future alumni. This will create so much opportunity for the MSU family to be connected to companies looking to hire individuals with drive, a strong work-ethic and passion. Seven of my former MSU basketball teammates are now my teammates now at UWM, including the legendary Mateen Cleaves. Mateen has made a massive impact on our team as a leadership coach helping guide our 700 leaders just like he guided me when we played at MSU together," said Ishbia.

The residual amount of the commitment will create the MSU Athletics Excellence Fund to provide both flexible and unrestricted resources that can address needs and take advantage of new opportunities as they arise.

"MSU Athletics is extraordinarily grateful for Mat's transformative gift, which is an example of bringing our mission to life," said MSU Vice President and Director of Intercollegiate Athletics Bill Beekman. "Mat's gift will forever enhance our department's ability to 'provide opportunities for our student-athletes to succeed academically, athletically, and in their life's pursuit.'  Years from now, we will point back to this truly historic day as a catalyst for broad success."

Pending MSU Board of Trustee approval, Ishbia has requested that the expansion of the Skandalaris Football Center and the Jack Breslin Student Events Center's basketball court be named in honor of Tom Izzo, and the southwest entrance of the Breslin Center and a display case inside be named in honor of Jeffrey and Joanne Ishbia.

"Mat is a brother to me and the Ishbia's are family, so Mat does not need me to heap credit or praise upon him. That is not who he is or what he seeks," said MSU Trustee Emeritus Brian Mosallam. "His refusal to name anything after himself speaks to his humility and character. It is a testament to his upbringing and the values instilled in him by his parents, Mr. and Mrs. Ishbia and speaks volumes about the way he was raised. Mat loves his parents, Coach Izzo and Michigan State University and finally felt the right leadership was in place to carry out his vision.

"Mat will single handily change the trajectory of MSU athletics and will impact thousands of Spartans' lives forever. No other Spartan can claim this. Mat Ishbia is the greatest Spartan ever."

Michigan State University and the Department of Intercollegiate Athletics thanks all donors who make a difference in the lives of Spartans everywhere through philanthropy. For more information on financially supporting MSU Athletics through Spartan Fund, please visit http://SpartanFund.net.