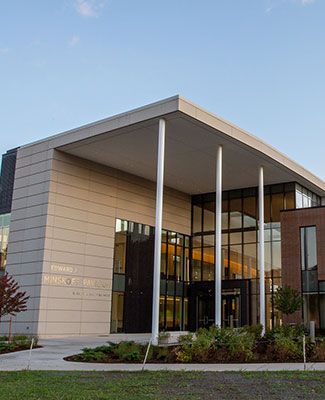 Every building on Michigan State’s campus has a story. Why was it built? Who led the charge? How does it drive the work of the faculty who spend their careers there? How did it impact students who went there to lay the foundation for their careers? and then live on in the memories of alumni?

Thanks to the investment of generous donors, today students and faculty navigate a modern campus, writing fresh chapters in the stories of the buildings they traverse.

Here, we present a far-from-comprehensive, bricks-and-mortar view of the Empower Extraordinary campaign and, more importantly, how several new spaces are inspiring faculty and students every day.

New On The Block

Two years of construction, plus more than four years of fundraising and anticipation, culminated when the Minskoff Pavilion opened this fall with 100,000 square feet dedicated to enhancing the student experience through its design around community, collaboration and teamwork.

The three-story pavilion is named after Edward J. Minskoff, an MSU alumnus and real estate developer, whose $30 million gift in 2018 was the largest single gift from an individual in MSU’s history. The $62 million project was funded entirely from the support of more than 1,700 donors, making it the capstone of Empower Extraordinary. In all, more than 80 spaces—including team and interview rooms, classrooms, entry spaces, labs and lounges—were named by donors.

Connected to the current Eli Broad College of Business facilities, the pavilion features collaborative and immersive learning environments and a signature glass-walled atrium with panoramic views of the Red Cedar River. It houses an entrepreneurship lab, flexible classrooms, a media studio, and an expanded career center to serve students, recruiters and corporate partners.

It is true that I have seen a lot in my time here at Michigan State, but I can say without any fear of contradiction that I have never seen anything like the Minskoff Pavilion—not even close. This is a truly spectacular and inspirational building. Every day, when I come into the office, I walk down the left-hand side of the building, past the breathtaking atrium and the smell of fresh bread and coffee, toward the floor-to-ceiling windows that look over the beautiful banks of the Red Cedar River, and I am truly inspired. That walk makes me want to do something special that day—that is, do something that the building could be proud of—and I am thankful for that.

The Lasch Family Golf Center, completed in 2016, provides Michigan State’s golf teams with one of the finest, most well-appointed facilities in the nation.

Empower Extraordinary campaign Co-Chair Bob Skandalaris gave the first leadership gift to the golf center, helping to motivate other donors, leading to more than $6 million raised in private support for the project.

The Spartan Golf teams have been on an upward trajectory.

The women’s team claimed its second straight Big Ten title in 2018 and made its 20th NCAA Regional appearance in the last 21 seasons in 2019, hosting the East Lansing Regional at Forest Akers West. Senior Ally Geer-Park was selected as one of just 72 women to compete in the inaugural (2019) Augusta National Women’s Amateur, the first-ever female tournament on the course, and recently received an invitation to participate again in 2020.

Meanwhile, the men’s team had one of its best seasons in a decade in 2018-19. The Spartan men made their program-record fourth consecutive NCAA Tournament appearance, placed third at the Big Ten Championships and won the Colleton River Collegiate.

The Spartan golfers have been just as successful in the classroom as on the course. For the eighth consecutive year, the Michigan State women’s golf team was honored with the Athletic Director’s Award at the 2019 Spartan Academic Excellence Gala for achieving the highest team cumulative grade-point average, which was 3.501.

After having the Rearick Center for 12 years and now looking at what we have today, I would say that we have arrived. I’m just so humbled and appreciative to each one of you who has made an impact on our lives, and who will make an impact on our student-athletes for decades to come. It really is just an incredible facility.

Construction cranes are part of the MSU landscape these days, transforming some of MSU’s most iconic spaces and creating new ones from the ground up. Donors inspired by the Empower Extraordinary campaign are behind many of the projects now underway. One of the biggest is nearing completion on West Circle Drive.

The Billman Music Pavilion, named to honor lead donor and alumnus James K. Billman Jr., M.D., is on schedule for a grand opening in April.

The College of Music has raised nearly $17.5 million for this $40 million project to add 37,000 square feet of new space to the existing Music Building and renovate another 8,500 square feet in MSU music facilities. The project functionally doubles the square footage of the existing academic space for the college.

The College of Music’s ability to attract and retain the brightest and the best students and faculty will be elevated by the new and renovated spaces, which include:

Notably, percussion students will move from a too-small and windowless facility that required protective earwear when they played to what will be one of the best percussion rehearsal spaces in the nation.

Additionally, students and faculty will be able to interact in the new two-story atrium, an outdoor terrace and courtyard. Natural light flooding in from windows and skylights will provide illumination and fresh inspiration.

Some Facts: how music is scaling up

Buildings appropriate for music have unique requirements. Thus, the 18-month construction phase of the Billman Music Pavilion has been no small undertaking.
The project was intricately designed for vibration and sound isolation from floor to floor, room to room and from the outside in. The slated roof, for example, houses a special layered insulation system, so that outside noise from rain, lawn mowing, ambulances driving by—nothing—will be audible to the musicians and singers rehearsing inside.

The emphasis on sound isolation called for cast-in-place concrete—enough for 14-inch-thick floors and 12-inch walls. That translated to more than 3,800 yards of concrete being poured at the site—nearly 400 truckloads. A 12-inch column with that amount of concrete would reach a height of 6.2 miles.

In all, it will be one of the most ambitious structures on campus.

I am so very proud of everything the faculty, students and staff of the College of Music have accomplished in this building over the years—developing a truly world-class teaching/learning environment—but I am even more excited to see what the future holds with a facility befitting of our size, our sound and our spirit.

STEM Teaching and Learning Facility: a new powerhouse for students

When completed in the fall of 2020, the 117,000-square-foot STEM Teaching and Learning Facility will house classrooms and laboratory spaces that will support introductory courses for biological sciences, chemistry, computer science, physics and engineering. Additionally, the facility will provide student studio space and a vibrant commons area, as well as a new home for MSU’s Hub for Innovation in Learning and Technology.

The central structure of the new building is the former Shaw Lane Power Plant. For sustainability purposes, the project involves wood-based construction and will keep as much of the old building as possible. The total project cost is $72.5 million and involved $29.9 million through capital outlay in state funds.

Above and below the surface of MSU’s campus, the Facility for Rare Isotope Beams (FRIB) has been taking shape since 2012 as the world’s most powerful rare isotope accelerator, supporting the mission of the Office of Nuclear Physics in the U.S. Department of Energy Office of Science.

MSU was selected by the U.S. Department of Energy to build and operate the $730 million scientific user facility that spans more than 550,000 square feet.  The university is home to the nation’s   No. 1 nuclear physics graduate program, according to U.S. News & World Report.

When it’s operational in 2022, FRIB will power discoveries that will lead to applications for society, as well as educate the next generation of nuclear scientists who will advance the benefits of rare isotope science for generations to come.

LEARN MORE about support for MSU facilities by contacting the development officer for your college or unit, or by calling University Advancement at (517) 884-1000.