A First for CMSE

“My vision is for CMSE to be able to attract the absolute best and brightest to the department. I want MSU to be the go-to place for anyone interested in this field.” 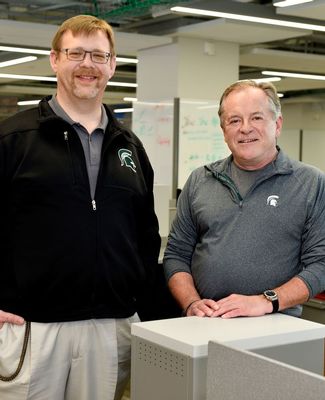 A First for CMSE

“My vision is for CMSE to be able to attract the absolute best and brightest to the department. I want MSU to be the go-to place for anyone interested in this field.”

Michigan State University has announced a $500,000 graduate fellowship endowment to the Department of Computational Mathematics, Science and Engineering – the first in the department – from MSU alumnus Raymond Ginther and his wife.

The gift will establish the Raymond P. and Marie M. Ginther Graduate Fellowship Endowment, which will provide academic and research support to recruit one or more exceptional graduate students each year.

“Graduate education is a core mission of Michigan State University, and this gift will play an important role in building the graduate program in this exciting new department,” said R. James Kirkpatrick, College of Natural Science dean. “We are very grateful to the Ginthers for their generosity and vision.”

Andrew Christlieb, CMSE chair, said that the endowment is incredibly important to the department because it provides a mechanism for recruiting the best students.

“To build a world-leading department, we need talented graduate students who are enthusiastic about being here, and enthusiastic about what we’re doing,” Christlieb said. “This endowment gives us the ability to recruit that level of talent. It means a lot to us.”

After Ginther earned his bachelor’s degree in social science from MSU in 1973, he worked in the criminal justice field and in the publishing industry before retiring in 2001. His wife worked for an investment firm established by the head of the math department at Stony Brook University for 20 years until she retired in 2007.

“We were the beneficiaries of a good company; we reaped financial reward,” Ginther said about the investment firm from which his wife retired. “All of their trading was based on mathematical formulas. This made us realize the value of mathematics and its importance related to how the world works. We were both of the mindset that we had to give back,” Ginther said.

Ginther learned about MSU’s new CMSE department and was impressed with what was being accomplished across disciplines.

“I appreciated the synergies that working together on common problems – from the perspective of different disciplines – can have,” he said. “That’s what brought us to the decision to endow this fellowship at MSU.

“My vision is for CMSE to be able to attract the absolute best and brightest to the department,” Ginther added. “I want MSU to be the go-to place for anyone interested in this field.”

The Ginthers want this endowed fellowship to serve as an example to others about the opportunities for investment in MSU and its programs.

“We want to encourage others to pursue similar kinds of gifts to the university,” Ray Ginther said.