The Pull of the Earth: a Father's Gift Paid Forward

"Our bequest is about making sure people have access to education in the future, so they can become engaged citizens in the world." 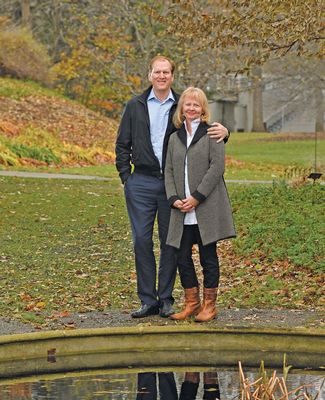 The Pull of the Earth: a Father's Gift Paid Forward

"Our bequest is about making sure people have access to education in the future, so they can become engaged citizens in the world."

Somewhere between their time on campus and rich careers in horticulture and energy, Laurie and Joe Thorp became convinced of the importance of experiential learning for students.

Laurie Thorp (’81) credits her father with fueling her passion for gardening, land, and nature—a love that eventually led her to a faculty position in MSU’s Department of Community Sustainability. Laurie’s husband, Joe (’81), a mechanical engineer in the oil and gas sector, also firmly believes in MSU’s transformative impact on students and the world.

Laurie and Joe met at MSU and married soon after graduation. She was completing a doctorate program at Texas A&M when her father became critically ill, bringing her home to Michigan.

“She came back to tend to her dad’s garden and take care of his estate; it was a healing period for her,” Joe says.

Back in Lansing, Laurie began a project in a local school district setting up an entire curriculum around a schoolyard garden.

“This continues to be a big part of my work today—mentoring students and looking at food, food systems, food access, and health and nutrition,” says Laurie, who was one of the founders of the MSU Student Organic Farm and is currently the director of MSU’s RISE (Residential Initiative on the Study of the Environment) program.

Laurie and Joe lived in many cities in the United States and around the world before returning to the Lansing area.

Joe is chairman emeritus of the American Petroleum Institute’s Committee on Refinery Equipment, former head of the U.S. delegation to the International Standards Organization technical committee on oil and gas equipment, and a fellow of the American Society of Mechanical Engineers.

“Our bequest is about making sure people have access to education in the future, so they can become engaged citizens in the world,” Laurie says. “We know how critically important that is and how much it’s changed our lives.”