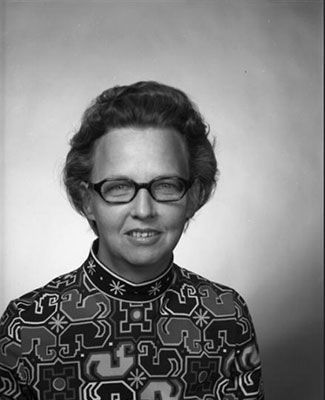 Surely Loretta VanCamp had days just like the rest of us. Days where to-do lists were checked off. Deadlines were met. Conversations were had over the water cooler. Things were good but, by all accounts, uneventful, and certainly not worthy of the history books.

That is, until VanCamp, an MSU alumna, accomplished microbiologist, and lab supervisor on Barnett Rosenberg’s research team actually did become part of history.

It was the mid-1960s. VanCamp, Rosenberg, and then-graduate-student Thomas Krigas were conducting an investigation into whether electromagnetic energy could stop cell growth. What they found was that the platinum from the electrodes did have an effect on the cells, and that when combined with chloride and ammonium to create the compound cisplatinum, it could be used to interfere with the growth of cancer cells.

Out of this discovery came cisplatin, and later carboplatin, which remain the most widely prescribed and effective treatments for a laundry list of cancers.

With royalties and licensing revenue from their inventions being funneled into the MSU Foundation, VanCamp and her cancer-drug compatriots are, to this day, indirectly responsible for hundreds of thousands of dollars in research grants and seed money that make even more great MSU discoveries possible.

Though she passed away in 2006 at the age of 80, the contributions VanCamp made through her years of work at MSU live on, not only through revenue her discovery continues to generate for the Foundation, but also in a new facility that bears her name: the VanCamp Incubator.

It is a 22,000 square foot multi-tenant facility launched by the University Corporate Resource Park (a subsidiary of the MSU Foundation) to serve the research and innovation needs of Michigan State and the Greater Lansing region. It houses nine wet labs, 42 office spaces, and shared equipment and conference rooms. There, startup companies in the areas of quantitative health, imaging, and structural biology will be able to go to work on their own new discoveries. Check off the to-do lists. Meet the deadlines. Chat over the water cooler. And maybe, once again, put MSU on the map for a truly groundbreaking invention.