MSU’s relationship with the Flint area health care system dates back nearly a half-century, with the community playing a role in the clinical education of more than 750 medical students from the College of Human Medicine since the 1970s. 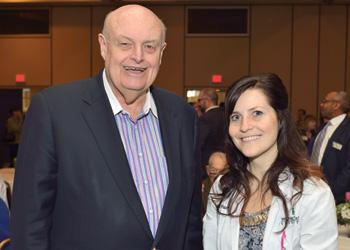 The Michigan State University College of Human Medicine is one step closer to establishing an expanded presence for its medical school and public health program in downtown Flint by fall 2014, thanks to a $9 million grant from the Charles Stewart Mott Foundation. That support will help MSU create an endowment to be used, in part, to expand the number of students trained in Flint and to recruit top public health researchers who will be based in the city through the program.

MSU’s relationship with the Flint area health care system dates back nearly a half-century, with the community playing a role in the clinical education of more than 750 medical students from the College of Human Medicine since the 1970s. In that time the college has also sponsored or affiliated with Flint area hospitals to train resident physicians.

The college launched its public health program and Masters in Public Health degree on MSU’s main campus in East Lansing in 2008. The degree is designed to be available to non-traditional students through online course work and community-based curriculum, research and practicums. The community-focus also emphasizes helping to identify, understand and address the unique health care needs of local families.

MSU’s decision in 2011 to embed the public health program in downtown Flint has been supported by several years of planning and development by the university and a number of local partners, including the Genesee County Health Department, Genesys Health System, Hurley Medical Center and McLaren Health Care–Flint. Mott helped fund those efforts with a $2.81 million grant to MSU in 2011.

Among the core goals for the expanded public health program in Flint is for the city to develop a national research reputation in the field of public health. To that end, the program must attract top caliber research faculty, and the endowment is intended to provide the stable funding needed to support those positions.

“MSU medical students have trained in Flint for many years and the university has developed a strong working relationship with our local health care institutions,” said William S. White, president and CEO of the foundation. “This public health project adds an exciting new dimension to that work.

“Having strong faculty and researchers based in Flint, and performing community-oriented research could help the area become nationally known as an innovator in the field of public health.”

The development of the Flint campus and MSU’s public health program is part of a larger vision by the university and Mott to increase the number of medical students trained by the program; establish a new focus on community-based research and health care delivery; and strengthen collaboration among local hospitals and institutions of higher education. Collectively, those efforts reflect a next-generation approach to growing the public health field in the U.S.

“Our partnership with the Mott Foundation is helping MSU do more of what we do best: bringing world-class research to bear on real-world problems,” said MSU President Lou Anna K. Simon.

“We are committed to providing much-needed health services for the Flint region, and we’re excited about the new opportunities this expansion creates for our students.”

The MSU College of Human Medicine’s Flint campus, including the public health program and researchers, will occupy approximately 40,000 square feet of a downtown building that once housed the offices of the Flint Journal newspaper. The property, which is currently undergoing renovation, is owned by Uptown Reinvestment Corporation (URC), a Mott grantee that is helping to lead the charge in Flint’s ongoing revitalization.

“We are looking forward to establishing our presence in downtown Flint with our medical school campus and new public health researchers,” said Marsha D. Rappley, M.D., dean of the MSU College of Human Medicine.

“We thank the Mott Foundation for making possible this public health research that is focused on improving lives and making Flint a healthier community.”

The MSU program will be central to the city’s growing health, education and wellness district, which includes hospitals, universities and other important community resources.

These and other local initiatives and institutions will play an important role in the MSU program, supplementing the teaching and resources available to both students and area residents.

The Mott Foundation, established in 1926 by an automotive pioneer, is a private philanthropy committed to supporting projects that promote a just, equitable and sustainable society. It supports nonprofit programs throughout the U.S. and, on a limited geographic basis, internationally. Grantmaking is focused in four programs: Civil Society, Environment, Flint Area and Pathways Out of Poverty. Besides Flint, offices are located in metropolitan Detroit, Johannesburg (South Africa) and London. The foundation, with 2012 year-end assets of $2.28 billion, made 439 grants totaling $91 million last year.

• Genesys Downtown Flint Health Center: This facility, which offers family practice, specialty and urgent care, was opened by Genesys Health System in August 2013 and has brought 60
workers to the city center.

• Program of All-Inclusive Care for the Elderly (PACE): This Genesys program is expected to open in 2015 and will target the unique health care needs of area senior citizens. Located on the former International Institute property, it will bring an additional 70 workers to Flint.

• Flint Farmers’ Market: Expanding access to fresh, locally-produced food will be the focus when the market moves this year to its new home at the Flint Journal’s former printing facility downtown. The market, which is managed by URC, will accommodate about 80 vendors and offer educational and entrepreneurial opportunities to the community.