With a love for giving back and a curiosity that doesn’t quit, Russ King, ’70, stays rooted in his desire to help give people a chance. 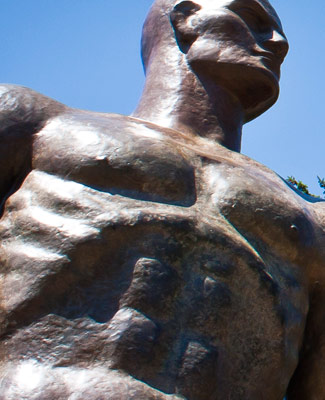 With a love for giving back and a curiosity that doesn’t quit, Russ King, ’70, stays rooted in his desire to help give people a chance.

Russ King, ’70, saw his first college football game at MSU and has been attracted to the campus ever since. “I just absolutely loved the environment and the physical surroundings. I just felt like I was in a paradise—even in the winter, because it can be very beautiful then, too,” he says.

“Michigan State really fit my personality because it focused on people who maybe would never have a chance to go to school. And they personify that by going back to the community. We can apply our knowledge and help people who are living there right now.”

That love for the MSU, and for helping others, led King to donate his time, talent and treasure to help make the university even better. He has been a donor to MSU for nearly four decades, and credits his Christian faith for encouraging his dedication to service. King is particularly active among MSU Extension’s Detroit Partnership for Food, Learning and Innovation, which centers around urban food research and seeks to develop solutions to economic and nutritional challenges unique to urban environments. Since 2014, King has supported DPFLI’s mission to transform how people and communities interact with their local food systems.

He’s even advanced his own knowledge in the subject. King is a graduate of MSU Extension’s Master Gardener Program, which he enrolled in to further his then elementary knowledge of plants.

It stems from a love of nature that has followed King his entire life.

“I did a lot of lawn mowing when I was growing up, and I just had a great appreciation for God’s creation,” he says. “But I didn’t know anything about it.”

If it’s all about you,” he says, “then boy, you’re not going to have a whole lot of impact on anybody.

King grew up in Ypsilanti, Michigan, and graduated from MSU in 1970 with a business degree. After starting his work life selling copiers, he transitioned into the investment industry where he established a successful career, and went on to open his own firm—White Pine Investment Co.—in 1997.

He says that name was intentional; it was an important part of starting the business. “I wanted to find a name that represented the values and the culture that we were hoping to build. White pine is the Michigan state tree. It’s a fast-growing tree. When there’s a storm, there might be a branch or two that gets torn off, but that gives it more character. It withstands an awful lot of turmoil, which you must do in this business.”

Resilience and generosity, the latter of which has been part of his character for as long as he can remember, are what continue to drive King today.

“When I was growing up, I had a paper route and three or four jobs until I graduated from high school,” he says. “I paid for college myself. During that time, I would buy gifts for my siblings. I got a lot more joy out of it than they did. It was just fun to do, and so I sort of got used to that.”

It’s clear that King’s greatest joys come not from what he’s done himself, but from discovering what he can do for others.

“If it’s all about you,” he says, “then boy, you’re not going to have a whole lot of impact on anybody.”