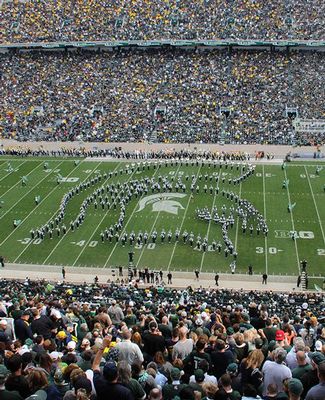 There’s the whistle! The drums thunder the staccato beat of the Spartan kickstep, your legs pick up the motion, and you race toward that brilliant light at the end of the tunnel. Your mouth is open in a yell that combines with 300 others as your feet echo the kickstep rhythm.

Suddenly you burst out of the Stadium tunnel into sunlight and kaleidoscopic color and a deafening wall of sound that smacks you in the face – the roar of more than 70,000 people who are standing up, row upon row up into the heavens, and screaming for you. For the Spartan Marching Band!

Horns up, you blast into the State Fanfare, then wheel and spin into the Fight Song as the roar grows impossibly louder.

And this is what it comes down to, this Moment that is distilled forever in the minds and hearts of not just every Spartan Band member, but every Spartan.

Back in 1870, when student and Civil War veteran Ransom McDonough Brooks formed a 10-member brass band made up of fellow war vets at Michigan Agricultural College, he could hardly have envisioned what he was starting—that his little ensemble would someday become the dazzling 300-member Spartan Marching Band (SMB) that entertains thousands of fans every year.

By the time MSU joined the Big Ten in the 1950s, its marching band was more than ready for the national stage with a unique “all brass and sax sound” and a famously distinctive step. The SMB kickstep is a very fast routine, performed at 220 beats a minute, that many other bands have attempted to copy, but without much success. Used when the band makes its stadium entrance, the routine is choreographed in eight-count segments, with horn, knee and hand accents on counts two and four—a strenuous physical routine that requires practice and conditioning.

“The Series,” the 4-minute rhythmic cadence pounded out by the band’s percussionists stands as another familiar signature of the Spartan Marching Band. This four-part stacked video showcases the intertwined and finely coordinated moves of the drumline performing at the Forest Akers Trust Practice Complex, the artificial turf field that transformed band practice when it was completed in 2014.

You don’t realize it then, but for the rest of your life you will remember the sound and sight of the Spartan Marching Band with a crystal clarity – forever tied to the Spartan experience.