On the Shoulders of Giants

"It was a great honor and big opportunity to receive this fellowship. Without it, I wouldn't have been able to achieve my dream.” 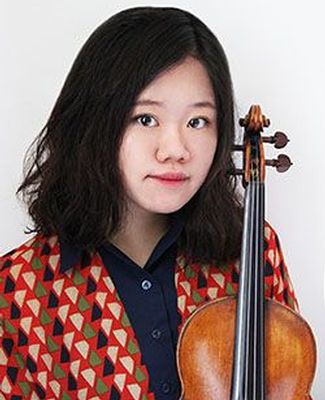 On the Shoulders of Giants

When Namjoo Oh takes her place as a new member of the Suzhou Symphony Orchestra in China this year, her achievement as a violinist will reflect not only her musical training at MSU but also the Romeo Tata Graduate Fellowship in Music.

The fellowship bears the name of a giant in MSU strings history, supporting a student who shows promise of distinction as a violinist. The fund recently received a major boost with a $242,000 bequest from another giant of the MSU faculty: C. Maureen Sander, who died in May.

For Namjoo, the fellowship was a life changer, providing a financial lifeline that allowed her to accept the Suzhou’s invitation to audition earlier this year.

"It was a great honor and big opportunity to receive this fellowship. Without it, I wouldn't have been able to achieve my dream,” she says.

Maureen Sander was a pathologist at MSU—establishing a placenta registry that played a significant role in broadening understanding of birth defects and other medical conditions. She grew up in the Lansing area and earned her undergraduate degree at MSU. She returned after completing a medical degree at the University of Michigan, a pathology residency at Massachusetts General Hospital and serving as a Fulbright scholar in England. During her long MSU faculty career, she transitioned to Maureen through gender affirmation surgery, becoming a pioneer in the MSU community. She also was an accomplished violinist.

She studied violin with Romeo Tata for many years, culminating in recitals by classical composers, including Brahms, Chausson and Mozart. She was one of only a few non-music faculty to perform full recitals on campus and did so on an annual basis for some 20 years. She also played with the Lansing Symphony Orchestra (LSO), and in annual music festivals in Aspen, Colorado and Interlochen. She continued to play for personal enjoyment in her retirement.

Maureen began making annual gifts to MSU music programs in the 1970s and was among the first to support the Romeo Tata Fellowship when it was created in 1990 following his death.

Romeo Tata was often the face of MSU strings during his lifetime. He served as a violin and music theory professor for 35 years, including as the chairperson for the Department of Violin and conductor of the MSU Orchestra. He helped mold the LSO in its early stages, conducting for 21 years and serving for an additional five years as concert master.

The Tata Fellowship was started by his family with a $20,000 gift to honor his commitment to string music and teaching. Over the years, family, former colleagues, students—and always Maureen—collectively gave more than $57,000 to the endowment, which had grown in market value to $115,000. With Maureen’s bequest gift, the endowment has tripled in value to more than $350,000 and will continue to grow from investment income.

It is a fitting tribute for Maureen, says her close friend of more than five decades, and fellow musician Hari Kern.

“I know Maureen thought the world of Romeo Tata and was very devoted to the violin,” Hari says. “She was such a generous and thoughtful person. Making that transition from male to female as a professor at MSU was not for the faint of heart. To know that so many MSU violin students will be beneficiaries of her estate would have made her so delighted and happy.”

Learn more about supporting the College of Music by contacting Senior Director of Development Rebecca Surian at surian@msu.edu or by calling (517) 353-9872.