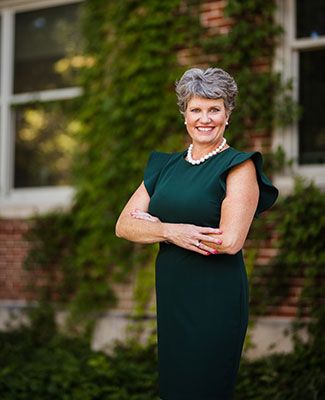 With more than two decades of experience in philanthropy and development, Kim Tobin has been tapped to serve as Michigan State University’s next vice president of university advancement.

Tobin will start her new role May 1, replacing Marti K.S. Heil, who is retiring after an accomplished 45-year career spanning three institutions — more than 33 of which were at MSU.

“Kim has an impeccable track record of success in donor and alumni relations with an inherent ability to engage audiences in philanthropic opportunities that transform lives,” says MSU President Samuel L. Stanley Jr., M.D. “Her involvement in development at every level of an institution will serve her well in this role, and I know she will further the excellence of MSU.”

As vice president of university advancement, Tobin will lead a 300-plus person team through planning and executing the institution’s next comprehensive capital campaign — a campaign that will further solidify MSU’s position as a leading global research university that improves the lives of students and positions our state, nation and world for a brighter future. Tobin will oversee university development efforts as well as the work of the MSU Alumni Office.

“I am a passionate advocate for philanthropy and the transformative impact it can make on an institution’s ability to effect positive change in the world,” Tobin says. “I’m eager to add my energy to the team at MSU and work together to help the university advance its newly defined strategic priorities. As a Great Lakes native, coming to Michigan feels a bit like coming home.”

Originally from Thunder Bay, Ontario, on the northern shore of Lake Superior, Tobin said the first college football game she ever attended as a child was in Spartan Stadium.

Tobin comes to the MSU community after serving as vice president for university advancement at Colorado State University, where she oversees a 160-member team and leads development efforts, campaign initiatives and alumni and donor relations. Her tenure at CSU was extensive, including experience at every level of the institution and leading two successful comprehensive campaigns. The most recent $1 billion campaign concluded in 2020, having exceeded its goal 651 days early with the support of more than 140,000 donors. Despite the pandemic, 2021 was CSU’s most successful fundraising year to date.

Like MSU, CSU is a land-grant institution and, having learned from her parents a deep appreciation for the value of education, Tobin says that access to higher education and a service-focused mission is important to her in her career efforts.

“I am delighted that Kim Tobin is joining MSU at a time when our ambitions are being honed by the university strategic plan,” says MSU Provost Teresa K. Woodruff, Ph.D., who co-chaired the search committee. “Creating an opportunity for our alumni, foundations and the broad MSU community to engage with these goals through University Advancement, and under her leadership, is exciting for all of us.”

“Kim embodies the values and abilities we were seeking,” adds Norman J. Beauchamp Jr., M.D., MSU executive vice president of health sciences and search committee co-chair. “She is of the highest integrity, a listener, a motivator and she cares deeply about people. Her experience and vision will be energizing and engaging for the amazing team of individuals working in University Advancement and for the present and future community of supporters of MSU.”

Tobin’s appointment is subject to approval by the Board of Trustees during its next meeting on April 22.

Starting May 1, Heil will transition to the role of senior adviser to the president through June 3 to help ensure a seamless transition.