Taking on the World

“I realized that there are three things that I really like: working with people, crunching numbers, and solving complex problems.” 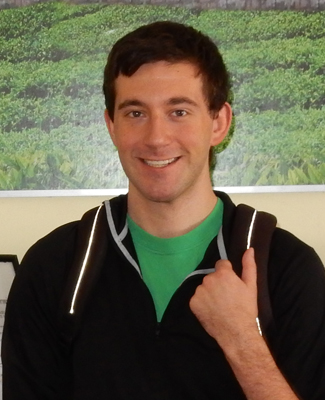 Taking on the World

“I realized that there are three things that I really like: working with people, crunching numbers, and solving complex problems.”

Dr. Delia Koo’s name, in bold white letters, graces the sign outside the International Center, but that’s not the only permanent mark she made on Michigan State University. She knew a thing or two about what MSU could do for the world and what the world could do for MSU, and though she passed away in 2008, the contributions she made to Michigan State ensured that it would be a hub of global activity for many years to come.

She was the driving force behind the expansion of the International Center in the early 2000s. She created an English tutoring program for international students. And, in her estate plans, she created two endowments in Asian Studies, one for faculty and one for students, to be used for research abroad.

The Dr. Delia Koo Global Scholarship Endowment is one reason John Joba, a native of Rockford, MI, and soon-to-be graduate from the James Madison College, has already gotten a taste of the real world—and already knows he can handle whatever it throws at him.

Joba’s preview of the real world came in the form of an eight-week independent study abroad trip to India and Sri Lanka, funded in part by Koo’s endowment and made possible by no shortage of mentors and faculty members along the way.

In India, Joba would live and work with Veena and Vidyadhar Mandrekar, both members of the MSU community. Dr. Veena Mandrekar is heavily involved in the Heritage of India Programs at the MSU Museum and Professor Vidyadhar Mandrekar teaches statistics and probability. In Sri Lanka, Joba would meet up with other MSU faculty members, Professor Linda Racioppi of the James Madison College and Dr. Dilrukshi Galhena from Agriculture and Natural Resources to study the post-conflict rebuilding process at tea plantations.

THE REAL-LIFE EQUIVALENT TO HOMEWORK

When Joba arrived in the city of Pune, India, he was given the opportunity to help the scholars at Bhandarkar Oriental Research Institute (BORI) determine the best way to turn all of their historical assets into a museum that would benefit not only their own scholars and historians, but Pune and India as a whole.

Cultural barriers, unfamiliar surroundings and the obvious fact that Joba was a twenty-something visitor from a Midwestern university—rather than a working museum expert—were no match for his interest in helping this community solve a problem. Joba, who majored in international relations, comparative cultures and politics, and Chinese, took on the challenge with the fresh perspective, curiosity and perseverance of a true scholar and researcher.

“We went out and interviewed people on the street about the Research Institute, asking if they thought they would benefit from a museum,” he says. “Most said that they would love a museum, but that they felt BORI wasn’t accessible or welcoming to them.”  Making BORI’s historical assets accessible to the public would expose people to important pieces of their culture, like dictionaries and manuscripts in old languages that have been forgotten over time.

A PRESENTATION WORTH MORE THAN A GRADE

He didn’t know right away that he would be invited to present some of these findings at a conference three weeks later. But he took that in stride, too, right down to the day he spent chasing a spotty Internet connection all over Pune, cobbling his presentation together on public computers in various coffee shops.

Back on campus and days from graduation, Joba remains humble about his accomplishments abroad. Mention that, as a senior in college, he may have had a hand in making history more accessible to people—and in doing so potentially helped to educate and cultivate the next generation of scholars—and his response will most likely be, “Wow! Yeah! I guess I did!”

He also came away with some direction. “I realized that there are three things that I really like: working with people, crunching numbers, and solving complex problems.” No surprises there. After graduation, he plans to brush up on math with some calculus, statistics, and programming classes and start applying to graduate programs in conflict management.

Between his newly chosen career path and his “Sure! Why not?” approach to big adventures and new experiences, it’s safe to say that this isn’t John Joba’s last foray into global problem solving.

It’s also safe to say that Delia Koo would be proud. Thanks to her legacy, a student was able to use the world as a classroom, find a path for the future and give MSU a reason to shout from the rooftops that Spartans really do have a lot to offer the world.

For more information on supporting International Studies and Programs at MSU, contact Senior Director of Development Angha Childress by calling 517-432-9183.