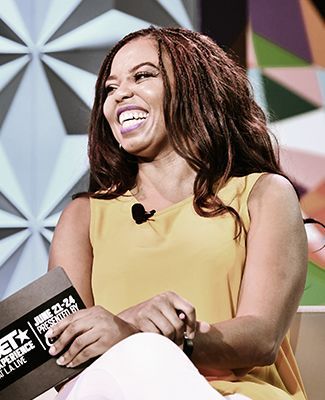 It’s safe to say Jemele Hill has “made it” as a journalist.

She’s a staff writer with The Atlantic, host of her own podcast “Jemele Hill is Unbothered,” and before that, she spent 12 years working in various capacities for ESPN.

And if you’ve followed her career—or her lively Twitter feed—you know that she doesn’t mince words when it comes to the love she has for her alma mater. She bleeds green.

It wasn’t always that way.

A native Detroiter and lifelong sports fan, she grew up following the University of Michigan—the Fab Five was a big deal and the football team was doing well—so she always figured she’d go there.

But Michigan State had something that the University of Michigan didn’t: a strong journalism program. Her career aspirations won out, and she never looked back.

“I truly decided to go to Michigan State for the academics—to be a journalist,” she says. “It was the best decision I’ve ever made.”

Years later, she maintains that for everything she accomplished as a student here—all the growing up she did, all the experiences she had, the opportunities opened up to her in the College of Communication Arts and Sciences and as a student journalist at the State News—and everything she has gone on to accomplish after, she owes Michigan State a debt that she can never repay.

Last fall, she saw on Twitter that the MSU student chapter of the National Association of Black Journalists (NABJ) had launched a fundraising campaign to send its members to the 2019 NABJ Convention in Miami, where they would have the opportunity to network with some of the nation’s most prominent industry leaders, attend workshops, learn new skills, and explore internship and career opportunities in every imaginable area of media and journalism. Jemele immediately jumped in to help, making a $2,000 gift via MSU’s CrowdPower platform, to help cover the students’ registration fees. 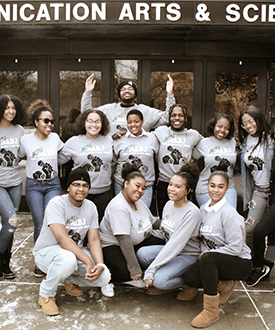 As young black journalists at the beginning of our careers, we’re still figuring out what it means to be a journalist of color in a society that’s so driven by race and race politics. Jemele Hill, who continues to always take a firm stance in her beliefs, has become a prime example of our intersectionality as black journalists today. We cannot thank her, along with our other amazing donors, enough for giving us the chance to benefit by networking and learning from people who look like us, think like us and share the same experiences as us at the NABJ convention.

Jemele knows firsthand the value of that experience.

“When I was in college, me and my friend who worked at the State News would scrape together whatever money we had and attend the NABJ annual convention,” she says. “It was one of those experiences that taught me that I could do this. And I think it’s so important that young people of color in this industry get that message constantly.

“As I’ve been able to be more successful in my professional life, the thing that really brings me joy is when I’m able to uplift and position other people. I feel that it is my obligation to make sure that I hold the doors open for somebody else.”