Coming Together To Give

Spartans and friends from around the globe came together to give more than $550,000 to support MSU programs and causes on Give Green Day. 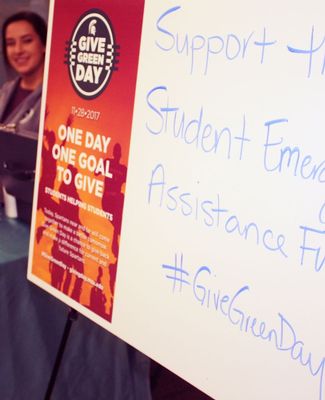 Coming Together To Give

Spartans and friends from around the globe came together to give more than $550,000 to support MSU programs and causes on Give Green Day.

The effort took advantage of the timing of Giving Tuesday, a global day of philanthropy that encourages people to give back following Black Friday and Cyber Monday.

A network of advocates helped spread the word online through social media, using the #GiveGreenDay hashtag, which was trending regionally on Twitter for most of the day. Only gifts that came as a result of this social media and online campaign were counted as part of the Give Green Day campaign.

Twenty-nine campus programs had specific fundraising goals for the day. The Business College Pavilion project struck a chord with many alumni and friends, who more than tripled the $25,000 goal, raising $81,661 toward a modernized teaching and learning facility for the Eli Broad College of Business.

The College of Music set out to raise $5,000 for the Spartan Marching Band Jacket Fund, and far exceeded its goal by collecting $13,630—which will push them closer to their longstanding goal of providing the traditional Spartan Marching Band jacket free of charge to freshman band members each year.

MSU alumni clubs pulled out all the stops, too, harnessing the network of Spartans around the world, who made 431 gifts, totaling $64,215 for their respective student scholarships.

The campaign surpassed its $250,000 goal just before 3:00 pm, and received its 2000th gift shortly after 4 p.m. By 9 p.m., the Give Green Day campaign had raised more than double its original goal.

The first gift, $500 from an alumnus in Houston, TX, came in at exactly 12 a.m. Gifts ranged from one dollar to an anonymous gift of $25,000, and originated from 44 states and 12 countries, including Brazil, China, Nigeria, and Australia. There were more than 200 gifts from students, 1,000+ from friends of MSU and nearly 2,000 from alumni.

Visit givingday.msu.edu to see social media posts and project-by-project results from the day.