"I see it (giving) as making an investment in botany at MSU. It allows MSU to continue to lead that field and also helps support students." 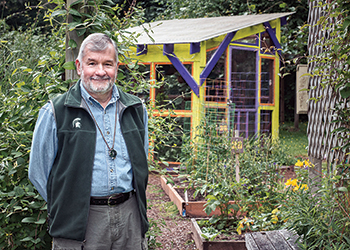 When James Rodman (’67, Honors College, Natural Science) was a student, he worked in the MSU Herbarium. At the time, he had little inkling of how much this job would influence the arc of his life, or that he would one day become a herbarium benefactor.

The first person in his family to attend college, James decided on MSU because he received an Alvin Bentley Foundation Scholarship for two years, which paid his tuition, room and board. His last two years, he received a Trustees Scholarship that covered tuition only.

“So that meant I had to get a job,” James recalls.

He had been taking courses in botany, chemistry and economics but was undecided about the direction he wanted to take. As a student employee in the herbarium, he got the opportunity to accompany the director, John Beaman, on a field trip to Mexico to collect plant specimens. The trip decided his major.

“That secured my future in botany,” James says. “It opened my eyes to a world far beyond Detroit, where I grew up, and Michigan.”

Rodman went on to earn his master’s and doctoral degrees in biology from Harvard and then taught at Yale. He also served as a program director for the National Science Foundation until he retired to Washington State in 2006. But he never forgot MSU. As soon as he got his first job in 1973, he began giving to the university and has donated every year since, including creating the MSU Herbarium Endowment Fund and the James E. Rodman Botany Scholarship Endowment.

“MSU is my first love,” he says. “The endowments are my way of honoring the place where I had been given opportunities, as well as honoring John Beaman. I see it as making an investment in botany at MSU. It allows MSU to continue to lead that field and also helps support students.”

The herbarium, located in the east wing of the Plant Biology Building, preserves more than 500,000 plant specimens from all over the world.

Learn more about supporting the College of Natural Science, by contacting Senior Director of Development Corey Longley-Palmer at longelyc@msu.edu or call (517) 353-1637.