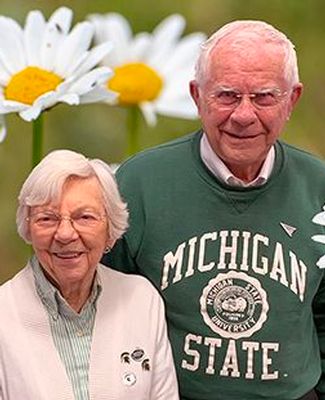 When you’ve been in the business as long as emeritus professor of entomology Roger Hoopingarner has, you become an expert on a few things.

Obviously you become an expert in your area of study, which, in Roger’s case is apiculture—bees, to the layperson: a critical component of keeping the world alive via pollination.

But you also figure out a thing or two about how to keep your area of study alive once you’ve hung up your professor hat and moved into retirement.

In most cases, that involves having excellent colleagues to take up the baton, and bright graduate students with fresh minds to be molded. Proper funding will help get you both.

Roger’s interest in bees blossomed from a Boy Scouts project when he was a teenager. He and his brother started their own colony, and by the time they were college-aged, their apiary had 20 colonies.

One of his most noteworthy accomplishments during his time at MSU was developing a research program around creating parasite-resistant bees, that would enable them to fend off the parasite-borne diseases that can easily decimate a bee population.

The work that he, his colleagues, and their students were conducting—insect conservation rather than pest elimination—made them a bit of an anomaly.

“Bees are kind of a funny animal,” he says. “Especially at a university with such a strong background in agriculture. In many entomology departments, the work is devoted to insects we want to get rid of, to protect the crops. But bees are an insect we want to keep, so that the crops will grow in the first place.”

Turns out, it’s much more difficult to find funding for that kind of work. So, after his retirement Roger decided to do something about it.

“I wanted to give the professors some freedom to not always have to be hustling for money to fund their graduate students,” he says. “And I wanted to give Ph.D. students the flexibility to, say, continue their work for an additional year without worrying about how they were going to pay for it.”

In 2004, he created the Roger and Barbara Hoopingarner Endowed Graduate Fellowship in Entomology via a charitable bequest. In 2006, he pledged an additional $200,000 to support the endowment using the IRA Qualified Charitable Deduction, and has continued to grow the fund ever since.

He didn’t stop there.

“There are very few entomology programs around the country that have dedicated studies in apiculture,” he says, “and I wanted Michigan State to stand out among them. I knew that having an endowed professor position in the field would certainly help.”

So he worked closely with development staff in his college and the Office of Gift Planning to come up with a creative way to make a $1.5 million gift that will be the Roger Hoopingarner Endowed Professorship in Apiculture and Entomology.

Roger used a combination of immediate cash gifts and future gifts from his estate to fund the position, including a Retained Life Estate gift, which transfers ownership of his home to MSU and allows the university to collect the profits of its eventual sale.

For Roger, it felt right to give back in such a big way, to a place that allowed him to do so much.

“Michigan State was very good to me,” he says. “Of course I got my start here with good mentors. And I did good, fulfilling work here. But I also met my wife here. I had my family here. My blood is pretty green.”

With any luck—and some hard work on the part of some excellent graduate students and an endowed professor—the rest of the world will be nice and green, too. It certainly wouldn’t be without bees.

LEARN MORE about supporting the College of Agriculture and Natural Resources by contacting Kathy Spring at springk1@msu.edu or by calling (517) 353-4749.