Unleashing the Superhero Within on Give Green Day

Qualman is the CEO of Equalman, where he is a motivational keynote speaker and author on the topics of digital leadership and reputation 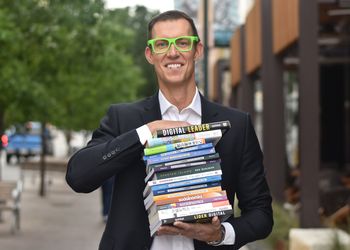 Editor’s Note: This piece was first published in Spartan Magazine in Fall 2017. Erik Qualman has consistently supported Give Green Day as a donor and fundraising Champion, so with Dec. 3 and the fourth Give Green Day approaching, we thought it was fitting to feature his story once again:

Erik Qualman has no need for the word quit. Not when he got four teeth knocked out during his big chance to play with the Spartan men’s basketball team, and not today as he aims to be as inspiring as Walt Disney.

Instead of mouse ears, he sports neon green glasses.

Qualman is the CEO of Equalman, where he is a motivational keynote speaker and author on the topics of digital leadership and reputation. His audiences include Starbucks, the National Guard, and the NCAA—diverse, but with a shared desire to lead in a digital world.

His Clark Kent-style green frames hint at his Spartan roots, and his Superman-inspired theme. His first initial and last name even spell out Equalman. To Qualman, everyone is a superhero, and his job is to help people unleash their powers. He encourages his audiences to choose one word that defines them.

“Even if you’ve just got to one person, you know it’s worth it,” he said. “My only goal in life is to entertain, educate and empower people to achieve their best life.”

In his line of work, people always come first. He holds “thought leadership” lunches to hear from the digital world’s best and brightest in an effort to stay ahead on trends and to brainstorm new ideas, to further benefit his clients.

Since launching in 2009, he has served hundreds of businesses and organizations. His biggest client criterion? “They have to be positively impacting the world in some form or fashion,” he said.

Qualman’s business tenacity can only be paused for one thing: family—his wife and customer engagement manager, Ana Maria, and their two daughters. He has vowed never to spend more than 52 nights a year away from them. “Family is the most important thing for me, so I put these guardrails in place,” he said. “I try my best to live by the quote, ‘how you spend your days is how you spend your life.’”

When it’s time for business, Qualman’s eyes are locked on Equalman’s future. He has set a “laughable goal” to reach the size and impact of Disney. He’s not intimidated. He’s used to lofty challenges.

At MSU, he was the manager for the men’s basketball team for his freshman, sophomore and junior years. He practiced relentlessly, but was rejected for the team every year.

One day when the team was down a player during practice, Coach Tom Izzo called Qualman in. He took an elbow to the mouth and lost four teeth, but kept playing. “I knew this was my one shot,” he said.

After practice, Qualman recalled, Izzo said, “I don’t know if you’re the toughest guy I know or the dumbest guy I know.”

He made the team.

The lesson? Entrepreneurship is about staying in the game. You can get your teeth fixed later.

And while it’s sometimes exhausting to be his own brand, Qualman knows he needs to stay on the ball if he wants to inspire the world the way Disney did.

Though it requires risk, the reward is pursuing his passion. He loves it, because “you’re going to work harder than you ever have, but then it never feels like work.”

This story was originally published in Spartan Magazine. It was written by Catherine Ferland.