"I was really honored that an endowed chair was offered to me. It does make a difference, because it means you will have support for what you do. That means a lot." 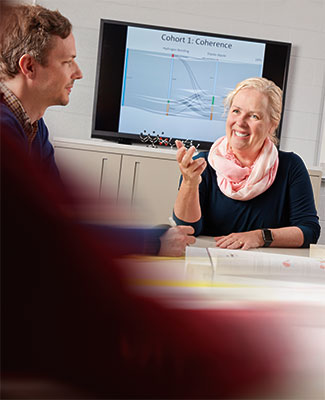 "I was really honored that an endowed chair was offered to me. It does make a difference, because it means you will have support for what you do. That means a lot."

So much has been said about endowed faculty chair positions in the Empower Extraordinary campaign, you probably know this already: endowed chairs distinguish top faculty. But, as you might suspect, the impact of these positions goes far beyond a title.

Endowed chair holders are established leaders who squarely look the world’s most vexing problems in the eye and see a way through. Their vision, work and success—buoyed by the consistent funding an endowed chair position provides—build the academic capital that draws in other excellent faculty as research collaborators and partners. The brightest students are drawn in as well—and inspired to go out to do the same.

It safely can be said that endowing a chair is one of the most profound investments anyone can make toward creating a better future.

“Being able to offer endowed chairs helps us compete for top talent and to support the culture of excellence that today’s challenges demand,” President Lou Anna K. Simon says. “We are tremendously grateful for our donors’ support in building a foundation for achievement that will sustain and elevate our reputation as a global knowledge leader for generations to come.”

To truly appreciate the impact of endowed chairs, consider MSU’s involvement in science, technology, engineering and math (STEM) education. MSU long has had an outstanding reputation in conducting research on STEM learning and applying the results. The addition of endowed chair positions is taking this area of strength to new heights, precisely at a time when the national need for scientifically literate citizens and workers has never been greater.

It started with Professors Emeriti and donors Glenda Lappan and Elizabeth Phillips.

Lappan and Phillips, along with colleague the late William Fitzgerald, were math education leaders who recognized that teaching methods and materials for middle schoolers were “woefully inadequate at capturing the imagination of students.” They also saw the need for the critical thinking skills STEM education provides. Researchers with a capital “R” but also practitioners, they visited middle schools throughout Michigan and beyond to diagnose, understand, design and field test better ways to engage students with math.

The result was the Connected Mathematics Project (CMP), a curriculum now used by approximately 30 percent of all middle schools in the United States. First published more than 20 years ago, the third edition of the curriculum, CMP3, was released in the fall of 2013. It is still the single, most widely used mathematics textbook in America for students in grades 6-8 and has an unmatched record of success.

Lappan and Phillips gifted their portion of the royalties to establish the Connected Mathematics Project 2 Fund at MSU which already has grown to support two faculty chair positions.

Now standing on the shoulders of Lappan, Phillips and Fitzgeralds’ work are Joseph Krajcik and Melanie Cooper, both Lappan-Phillips Professors of Science Education.

Krajcik is director of the CREATE for STEM Institute, a collaboration between the colleges of Natural Science, Education, Engineering and Lyman Briggs College, that seeks to improve teaching and learning of science and mathematics through innovation and research. Cooper is a professor of Chemistry who is also an integral part of the institute. Both are at the forefront of science education.

Cooper, who joined the MSU faculty in 2013, came from Clemson University where she easily might have finished her career. But in 2012 she found herself suddenly mobile—and highly sought after—when her husband retired early. Already working with Krajcik on a national initiative to develop the Next Generation Science Standards, she knew firsthand the quality of the work being done at MSU. But a few other places, including some in warmer climates, could claim quality as well. In the end, it was the endowed chair position that won her over.

“I was really honored that an endowed chair was offered to me. It does make a difference, because it means you will have support for what you do,” she says. “That means a lot.”

Krajcik came to MSU in 2011 after 21 years at the University of Michigan and became an endowed chair in 2015.

MSU Provost June Pierce Youatt says: “It isn’t so hard to recruit and retain the best in the country when you have the backing of the community and the backing of donors who are willing to help endow chairs. The opportunities still would be here, but to get the attention of the best you need to express the seriousness of your commitment.”

As typically happens with endowed chairs, Cooper came with funding; in her case a National Science Foundation grant to explore new ways to improve learning in a general Chemistry course. So it wasn’t long before she made her mark on MSU.

Krajcik and Cooper, along with other MSU colleagues, believed that the strategies first put forth by Lappan and Phillips in K-12 education could be used to improve learning in STEM during the first two years of college.

“We want students to develop a deep understanding of core ideas they can build on and put to use, not just facts they can regurgitate,” says Cooper. “This is starting to happen for younger students and there’s no reason it should stop at 12th grade.”

One of their targets was MSU’s introductory chemistry course, CEM 141, a challenging requirement for STEM majors that makes walking away with usable knowledge sometimes daunting. Cooper, along with course instructors, transformed the course. It now incorporates user-friendly technology including beSocratic, a flexible, web-based system that recognizes and responds to free-form student input, and iClickers, that encourage students to interact in the classroom while instructors assess their learning in real time.

Another initiative, this one to create a model for teaching science to elementary students, while also improving students’ skills in math, reading and writing, has been funded by a five-year, $5 million grant from Lucas Education Research, a division of the George Lucas Educational Foundation. The project aims to bring the benefits of project-based learning, an approach that encourages kids to explore real-world problems, to more classrooms throughout the nation. Krajcik is leading colleagues from MSU and the University of Michigan to design and develop materials for grades 3 and 4.

“We are poised to be leaders in improving the teaching and learning of STEM from kindergarten through college graduation,” says Krajcik. "We have international grants, grants with other institutions, and private support which is helping us be the place where great ideas can come to fruition.”

Endowed chair holders are sought after as keynote speakers at national and international conferences, to serve as visiting professors at prestigious universities, and as collaborators on research projects at other research institutions. At the same time, leading scholars and postdoctoral researchers are attracted to the institutions where the endowed chairs work. This helps everyone learn more as well as spread the word about methods and findings.

“You can be doing great work, but if no one knows about it, it isn’t helping,” Krajcik says.

Having the cover article in your field’s flagship publication is one way of spreading the word. Cooper did that recently, along with co-author Michael Klymkowsky with the publication of “Chemistry, Life, the Universe, and Everything: A New Approach to General Chemistry and a Model for Curriculum Reform” in the Journal of Chemical Education. Krajcik, Cooper and other MSU colleagues also made their argument for transforming how and what is taught in introductory sciences courses in a Perspectives paper in the October 16 edition of Science, one of the world’s preeminent science research journals.

Meanwhile, the applications for postdoctoral positions are rolling in, Krajcik says.

“You want to work at a place where there are other good people, who are as passionate as you are,” explains Krajcik. “The opportunity to work with others who are also passionately involved and interested really drives your day.”

Where will the future lead?

Cooper sees a future where MSU and other major universities will have put in place sustainable and flexible courses and materials across the gateway courses with methods to continuously put new learning back into them. Krajcik sees that and more, with MSU playing a leading role in meeting the national and international needs for creating a strong STEM workforce and populace.

They are dreams that Cooper and Krajcik know something about achieving. Because they already have a record of achievement that isn’t about just moving the needle on a challenge; it’s setting the stage for a future in which the needle is no longer needed.

For more information on making a gift to support faculty, visit go.msu.edu/endowed-faculty.