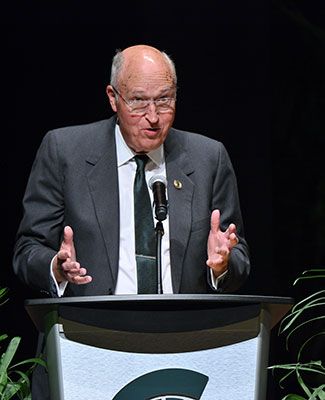 Dan Van Haften, Ph.D., is a 1970 alumnus of the College of Natural Science, where he earned both a bachelor’s and master’s degree in Mathematics. After decades-long career in telecommunications, he retired and started a brand-new endeavor: studying the application of mathematical principals in thinking, writing, and argument. In 2017, he made a gift to MSU to create the Van Haften Endowed Professorship in Deductive Literacy within the Department of Mathematics, and on September 14, 2022, he watched as the inaugural Van Haften Endowed Professor was honored at the Investiture for Endowed Faculty. Here are the remarks—which use the six elements of proposition—Dr. Van Haften made as the donor speaker at the event:

Thank you, President Stanley. It is an honor to address this Investiture.

The Van Haften Endowed Professorship in Deductive Literacy honors my parents, James and Esther Van Haften, who did so much for my sister Susan, and for me.

My father, my sister, and I are all Michigan State graduates.

She worked as a teacher, and helped put my father through Michigan State.

We are all Spartans.

When I came to Michigan State, I was blessed to take classes from many outstanding professors.

In addition to his legacy as a great teacher, Professor Frame’s legacy in perpetuity is to encourage great teaching by others.

How did I become a donor?

About six years ago, I met Samantha Adler from MSU development for coffee at a Panera Bread in Batavia, Illinois.

During our conversation, Samantha asked me, “What can you do for Michigan State?”

Her question made me think.

[Sought] What can I give back to the school that gave so much to me.

Reasoning, and geometry, are my passions.

Some of you may be math-phobic, but let me convince you to have a passion for one aspect of geometry.

At a dinner in Chicago with Keith Promislow, the Mathematics Department Chair at the time, Keith asked rhetorically, “Is it more important that Michigan State freshmen know how to solve quadratic equations, or that they know how to think and write logically?”

Keith answered his own question - “It’s more important that Michigan State freshmen know how to think and write logically.”

Keith’s question made me think; Keith’s answer made me act.

At that instant I decided to give an endowed professorship to Michigan State’s Mathematics Department.

I didn’t know it would be called a Professorship in Deductive Literacy.

In 2007, I retired from a 37-year career at Bell Laboratories, AT&T, Lucent, and Alcatel-Lucent, where I worked on telephone switching systems.

When I retired, I began work on a book project with fellow Michigan State graduate David Hirsch, a friend from first grade, and now a Des Moines attorney.

We wrote a book about Abraham Lincoln.

2300 years ago Euclid compiled what the Greeks knew about geometry.

He studied Euclid, “to learn what it means to demonstrate.”

Our research, and first book, revealed our discovery of what Lincoln learned when he studied Euclid.

Lincoln transferred the six elements that structure a Euclidean proposition into a verbal method.

He used the six elements to structure his persuasive propositions in speeches and letters, from 1854 until his death in 1865.

Both Euclidean propositions and Lincoln’s writing method reason use the six elements, the foundation for the scientific method.

Proclus’ definitions are a lens into a Euclidean proposition’s structure, and into Lincoln’s method for thinking and writing.

Both Euclid and Lincoln dealt with facts, words, ideas, and challenges.

Geometry, and the six elements of a proposition, provide a method that leads to truth.

In the Gettysburg Address, Lincoln used the six elements to prove what the North must do to win the Civil War, and assure “that this nation, under God, shall have a new birth of freedom.”

Thomas Jefferson used the six elements of a proposition, the same method, in the Declaration of Independence, where Jefferson argued, “that these United Colonies are, and of right ought to be free and independent states.”

The six elements were how Euclid and Lincoln built propositions with structured facts and words, leading to iron logic, and solid conclusions.

So yes, geometry offers a civil method to equip Michigan State students to think and write and persuade in the manner of Abraham Lincoln.

When Abraham Lincoln learned what it means to demonstrate, Lincoln’s propositions helped him meet the substantial challenges of his day.

I remember Civil Rights and anti-war demonstrations when I was here at Michigan State.

Some are new, some are similar, some are the same.

But there is a new, old way to organize a demonstration - the six elements of a proposition.

It is a joy to have Dr. Francois Greer as the first Van Haften Endowed

He is wonderfully equipped to tackle the geometric challenges.

But he alone cannot resolve all the challenges we face.

It will take all of us.

Thank you very much.

Learn more about Dan Van Haften’s gift—the first of its kind to the Department of Mathematics.