A Gift for MSU in Grand Rapids

“The DeVos and Secchia families have imagined and made a commitment to invest in the medical discoveries that are yet to come and believe this community will be a driving force in making them happen.” 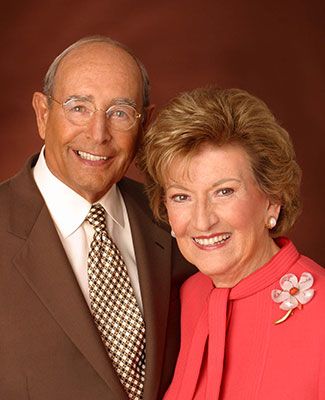 A Gift for MSU in Grand Rapids

Gifts of $15 million, $10 million from Richard and Helen DeVos and $5 million from Peter and Joan Secchia, will help construct the Michigan State University Grand Rapids Research Center, or GRRC.

Located on the site of the former Grand Rapids Press building at the corner of Michigan Street and Monroe Avenue, the new research center will bring together MSU scientists and clinical-based faculty physicians in the College of Human Medicine and other researchers from MSU’s partnering institutions.

When open in late 2017, the center will support 44 research teams poised for finding answers in autism, inflammation, transplantation, cancer, genetics, pediatric neurology, Parkinson’s disease, Alzheimer’s disease, women’s health and reproductive medicine, among other critical health areas. To date, MSU already has recruited more than a dozen research team leaders who will work in the center when it is completed.

“Michigan State’s research enterprise is ushering in a whole new era of medical discovery and there is no place we’d rather see that happen than Grand Rapids,” said Rich DeVos. “Helen and I are proud to be a part of it.”

Peter Secchia notes that the addition of a Big Ten research facility in Grand Rapids creates a new level of opportunity that he believes will move the economic needle in West Michigan.

“MSU is a proud member of the Big Ten’s Committee on Institutional Cooperation, which is responsible for more than $10 billion in funded research — far more than the Ivy League’s $4.3 billion. The center will help to tap into this network on a deeper level and expand the medical research agenda. It will be a magnet to attract business in the life sciences and growth in biotechnology. Joan and I are really excited to be a part of it,” Secchia said.

Support for the MSU’s medical presence in West Michigan is nothing new for either couple.

Peter Secchia, a 1963 graduate of MSU’s Eli Broad College of Business and the former U.S. ambassador to Italy, and Joan Secchia, a 1964 graduate of the College of Education, provided the lead gift for the MSU College of Human Medicine’s headquarters in downtown Grand Rapids, known as the Secchia Center.

Rich DeVos, co-founder of Amway and a recipient of an MSU honorary degree, and Helen DeVos are noted healthcare supporters and also provided lead gifts to complete the Secchia Center. Among the many institutions they have helped create in Grand Rapids are the Helen DeVos Children’s Hospital and the Cook-DeVos Center for Health.

“We are tremendously grateful for the ongoing generosity of the Secchia and DeVos families and their vision of a better, healthier world,” said MSU President Lou Anna K. Simon. “They have imagined and made a commitment to invest in the medical discoveries that are yet to come and believe this community will be a driving force in making them happen.”

Through Empower Extraordinary, which launched in 2014, the private fundraising goal for the research center is $40 million. The total cost of the facility is estimated to be $88.1 million with the balance to be generated through research funding.

MSU commissioned Anderson Economic Group to evaluate the benefits of the GRRC. Key findings included approximately 400 new jobs and an increase of more than $28 million in local annual spending.

To learn more about making a gift to the College of Human Medicine, contact Suzette Hittner at hittner@msu.edu or call (517) 884-7430.