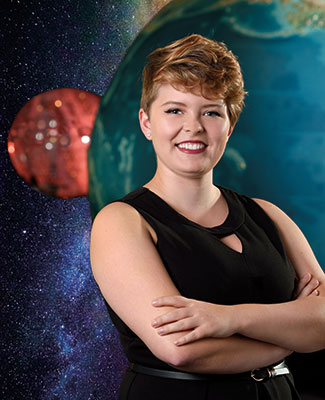 Music and theater students perform. Engineering and business students showcase their products. Medical and nursing students talk about how their learning will have a direct impact on saving lives. It’s not always so easy for students in the sciences to explain their work, even for the rising stars.

The Dean’s Research Scholars program in MSU’s College of Natural Science is actively changing that. Since 2012, the College of Natural Science (Nat Sci) has been cultivating some star-bright science ambassadors. Each year a cohort of outstanding undergraduate students are selected to work on research projects in collaboration with faculty mentors, graduate students and post-doctoral researchers to solve fundamental problems in the physical, biological and mathematical sciences. But, there’s a twist. These students also get significant face time for sharing their work with the public. Throughout the year, they represent the college at MSU events and engagements all over the country, talking about their research experiences, and giving alumni and friends a glimpse of what it’s like to be a student at MSU today.

“Our college is at the core of one of the premier research universities,” says R. James Kirkpatrick, Nat Sci dean. “It’s breadth and scale gives us a unique advantage in integrating student experience with research at the highest levels, both in the laboratory and out in the world.”

The idea for the program was born from a desire to connect an active and engaged alumni base from across the university with up-and-coming students eager to meet them. The alumni would see firsthand how research experiences are critical to an undergraduate education, while the students would pick up valuable communication skills.

“It’s a win-win-win, all around,” says G. Mark Voit, associate dean for undergraduate studies in the college and director of the program. “The students learn how to think about and explain the societal impact of their work in ways that the lay public can appreciate. Everyone comes away really excited about science.”

But much like a budding star needs energy, the program might never have grown beyond a nebula if not for the George E. Leroi Strategic Envisioning Fund. Leroi had a distinguished 40-year career leading the sciences at MSU, serving as dean of the College of Natural Science from 1996 to 2006. Former students, colleagues and friends of Leroi have contributed to the fund in his honor, which grew to allow strategic investments in educational opportunities at the discretion of the dean. The Dean’s Research Scholars program is a fitting result.

“Unrestricted funds allow us to try out great ideas, when governmental support would be inappropriate and other sources are unavailable,” says President Lou Anna K. Simon. “We are so thankful for the generosity of our donors who enable us to offer opportunities like the Dean’s Research Scholars to provide our students with a margin of excellence.”

If the Dean’s Research Scholars had to choose one representative rock star, it easily could be recent graduate Irina Pushel.

Irina was selected for the program in its second year and continued until her graduation in 2015. As a biochemistry & molecular biology and biotechnology major, she worked with the fruit fly to study a protein responsible for several cancers. Last fall, she co-authored a paper featured on the cover of the Journal of Biological Chemistry that provided the first detailed examination of a set of mutations similar to those present in a gene that causes eye cancer. This fall, she started a graduate program at the Stowers Institute for Medical Research in Kansas City, Missouri.

The possibility of publishing a paper in a major journal as an undergraduate student is one of the reasons Irina—who hails from Naperville, Illinois—chose MSU above other finalists vying for her attention including Cornell, Vanderbilt, Carnegie Mellon and North Carolina.

Though she certainly came to MSU with a lot of star power, she says the opportunity to talk with alumni about her work as a Dean’s Research Scholar was a constant source of motivation.

“You can get really isolated in the lab and lose sight of why you are doing things,” Irina says. “But when I would go out and people would be interested in what I was doing and so supportive, it made me realize how important it was and it would re-energize me to work even harder.”

The positive feeling goes both ways.

James (Jim) Hoeschele (’69, PhD Natural Science), who taught general chemistry and integrative studies at MSU for 15 years, has been involved with the program from the beginning. In fact, as a member of the alumni annual selection committee, he interviewed Irina and strongly recommended her for the program.

“This is a program that brings out the best in already outstanding students,” Jim says. “I knew Irina would be great from the get go. It is really a joy to watch these students sharpen their experience and to help them get the most out of their education. It keeps me connected to MSU, which feels like my second home.”

While Irina’s experience jumpstarted a research career, there also can be an unexpected advantage to diving into research as an undergraduate. Some students learn that certain types of research or even that research in general is not for them—at a point where they can still easily change their approach.

Sara Denbo can attest to that.

Sara worked as a professorial assistant at MSU’s National Superconducting Cyclotron Laboratory, participating in research to gain new insight into how the elements and the world around us were created in the stars. Along the way, she realized what really captivated her wasn’t the discovery process so much as how those discoveries could be used to guide better public policy decisions.

“Instead of getting to graduate school and realizing I lack passion for lab work, I’ve been granted the time to figure out what I’m passionate about,” she says. “Without these experiences, I would be far behind in learning about myself and constructing the best path for my future.”

Today, Sara, who double majors in astrophysics and women’s and gender studies, is aiming for a career in science policy. Right now she is working with Voit on a thesis that explores how our nation goes about funding large-scale science projects, using the Hubble Space Telescope as an example.

“She has gravitated toward the policy side of things, which I think is terrific because we certainly need more people doing that who are highly science literate,” Voit says. “She will be a great advocate for science.”

As great a success as the Dean’s Research Scholars has been for the students, the college and the public, the program will require long-term endowment support for its galaxy of stars to keep expanding.

Alumni Sharon (’64, Communication Arts and Sciences; ’87, MA Education) and Len (’64, Natural Science; ’75 MBA Business) Tabaka are the first to establish an endowed fund to support the program. Their endowment will provide scholarship support for future student participants. They say they feel fortunate to be able to give back to MSU and their hope is that this will encourage more students.

As a participant in the Classes Without Quizzes MSU alumni program for the past several springs, Len has had firsthand experience hearing the students present. Sharon also has experienced highlights of the students’ work.

“It is a great program that unleashes their talents,” says Len. “Sharon and I want to help the students and give them a boost which we know can sometimes make a difference.”

Steve Wagner (’73, Natural Science) and his wife Sunday, a self-described “Spartan by marriage” also have supported the program and are regulars at Classes Without Quizzes. Steve, formerly a data modeling director at CNA Insurance’s headquarters, also has served as a member of the alumni annual selection committee. What impresses him most about the Dean’s Research Scholars is how versatile they are.

“These students are multi-dimensional with very diverse interests,” he says. “They serve as well-rounded ambassadors of MSU who also happen to be really good at science.”

The generosity of the Tabakas, the Wagners, and many other donors is helping to ensure the stars will always align perfectly for science education at MSU.

Learn more about supporting the Dean’s Research Scholars and the College of Natural Science by contacting Senior Director of Development Corey Longley at longleyc@msu.edu or by calling (517) 353-1637.